Wild Heist at Peacock Manor Slot to be Released by Thunderkick

Yes, it has a strange title, but Thunderkick’s new online slot machine will have you head over heels. Wild Heist at Peacock Manor will hit all Thunderkick-powered casino sites on May 2nd 2018, boasting an unconventional crime theme, outstanding design, 3 random Wild features, and a bit of a dark, sinister feel.

Wild Heist at Peacock Manor is not a horror slot; it is a story about 4 brainiacs who are trying to pull off a seemingly impossible heist at the heavily guarded Peacock Manor. We don’t know much about Peacock Manor, only that it contains a valuable peacock statute, the main object of the heist. The twist in the tale comes from the story being placed in old times, meaning no high-tech tools, scanners, cameras and silencers; the protagonists will be armed with crowbars and lanterns, as well as some other classic tools. The symbols include 4 character symbols (the heist participants, three fellas and a dame), as well as A, K, Q, J and 10. A golden peacock appears 3-symbols high on the reels and pays like a Wild; the key is the Scatter and the letter W is the Wild. Wild Heist at Peacock Manor is a machine with 5 reels, 3 rows and 17 paylines which are fixed and active on every spin. 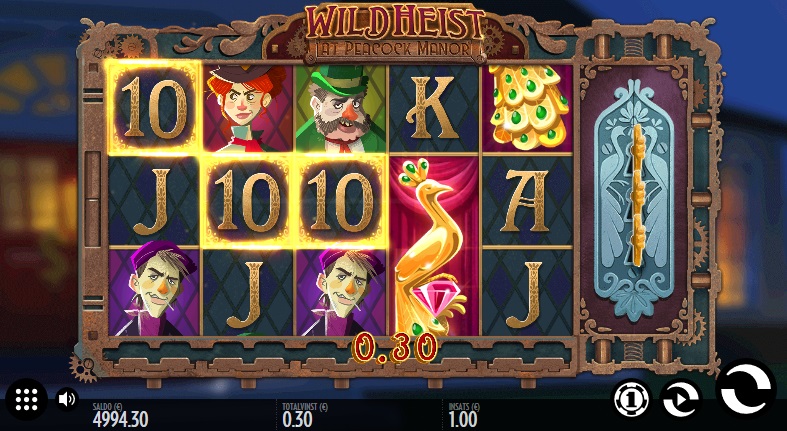 The greatest selling points of Thunderkick’s new product are Wild mystery features. They are randomly triggered and can make up to 3 whole reels to become Wild (Wild Reel feature), add up to 7 Wilds to the reels (Random Wilds feature) and add Walking Wilds which move one step to the left and are followed by re-spins (Walking Wilds feature). There will also be a main bonus feature triggered by 3, 4 or 5 key Scatter symbols. As it is announced, it will start with 7 free spins and it will involve a pick-me game which determines the type of free spins: with extra multipliers, with more free spins, with mystery feature and with one of the crooks turning into a Wild.

Wild Heist at Peacock Manor is a highly volatile slot machine and the top payout is 8,483 times your stake on every free spin. The RTP of Thunderkick’s new release is 96.1%. If you’ve ever had the fantasy of pulling the impossible heist, this is your chance to make it come true! It may not be Ocean’s Eleven, but we’ll take it.