It’s almost the end of March and it seems that we will play some really cool slot machines next month. We present you the best upcoming new slots for April 2018. 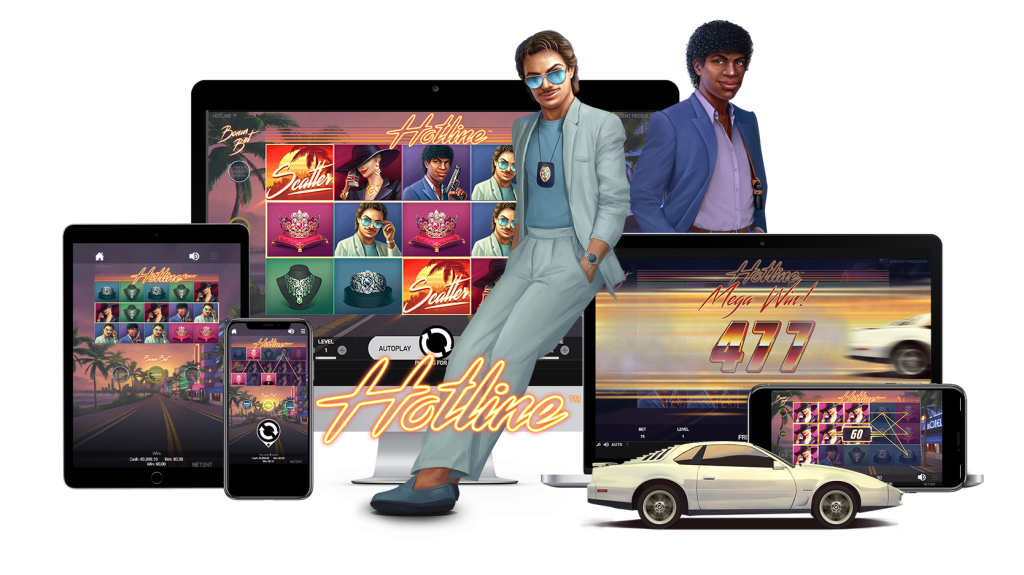 If you are a fan of 80’s TV shows, you must remember Miami Vice, one of the most popular TV shows at the time, and detectives Crockett and Tubbs. Well, with their latest slot title Hotline, NetEnt takes players to Miami with palm trees in the sunset and introduces two characters that are obviously based on our favourite 80’s heroes, Detective Rivera and Detective Quinn.

Neon signs, fast cars and loads of jewellery make this game eye-catching while an accompanying music score with an 80’s feel will set you in the mood for spinning the reels instantly. Visually impressive, the slot machine also comes equipped with a unique multi-level bonus bet feature that will boost your chances of winning at a certain cost.

Hotline uses a standard 5×3 layout and 30 fixed paylines. It offers regular and Expanding Wilds, Re-Spins and Free Spins. To play the game, you have to wager at least 15 coins, but you can increase the amount of coins with the bet level feature and using the innovative multi-level bonus bet.

The slot comes with one Hotline bet originally active and if you activate two or three Hotline bets, your base stake will be doubled or tripled respectively. Throughout the game, Wilds can land anywhere on the reels to replace regular symbols. Once Wild appears on one of the activated Hotlines, it expands to cover the reel entirely and award a re-spin during which it is held in its position. Re-spins are awarded as long as new Wilds hit the reels and expand. The free spins feature award 7 free games during which Wild landing on a Hotline expands and stays in its place for the duration of the feature.

With its innovative Bonus Bet feature that offers extra options and makes the game stand out from the crowd, Hotline is a multi-variance video slot that can be a huge hit on the market. 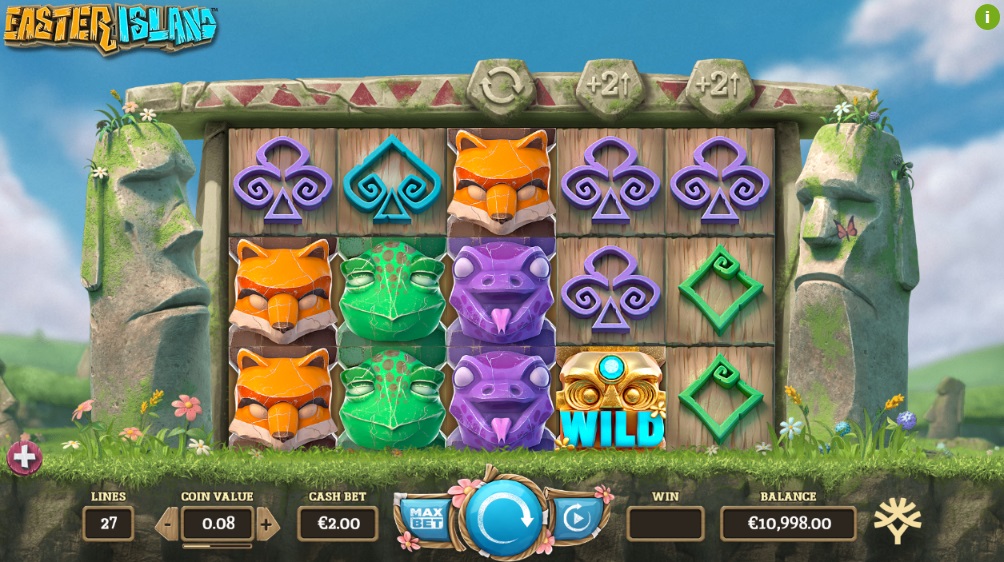 Easter is just around the corner and Yggdrasil Gaming takes its players to the remote Pacific Ocean with their new video slot Easter Island. Players will have a chance to re-discover the island well-known for its enigmatic Moai statues and meet two animated giants that will welcome them right from the start. Just like other slot machines from the developer, the slot features high-quality 3D graphics with smooth animations and an entertaining music score. The slot uses a 5×3 layout with expanding reels and the number of paylines varying between 27 and 103.

Players can enjoy the scenery with green grass and blue skies while two Moai statues will stand on both sides of the reels throughout the game. While exploring the beauties of the island, players will benefit from respins as long as they hit wins with winning symbols replacing either all high or low pay symbols thanks to the Symbol Swap Respin feature. When 4 or 5 symbols are included in a winning combo, the reels grow, so respins are played at a 5-row or 7-row tall grid. Wilds show up on the reels 2 and 4 only to substitute for all other symbols. When part of a winning combination, Wilds turn sticky and expand to cover the reels entirely thus enhancing your chances of winning big.

The maximum possible payout in the Easter Island slot is 47,000 coins and it is playable from only $0.10 up to $200 per spin. On March 29, Yggdrasil is launching a Missions Network Campaign with a whopping €60,000 prize pool. The player who climbs up to the top of the leaderboard will win an unforgettable trip for two to Chile and Easter Island. Besides Easter Island, the qualifying games during the campaign include Vikings go Berzerk and recently released Gem Rocks. 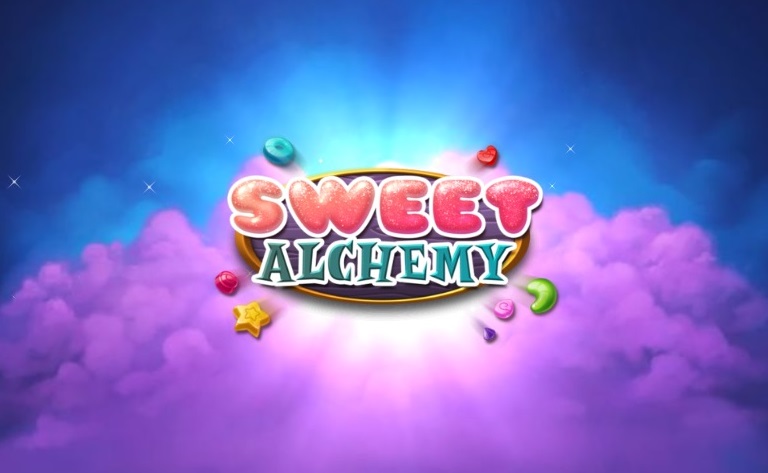 Play’n GO titles get more and more innovative and this time they come up with Sweet Alchemy, a video slot played on a 5×5 grid and offering loads of bonus features. Wins are achieved by connecting clusters of four or more matching candies and as soon as you create them, they will disappear from the play field allowing new ones to fall into their place.

The slot looks tasty and will satisfy your sugar cravings with all sorts of candies appearing on the reels. It features polished graphics in vibrant colours and an engaging soundtrack, while your hostess, an alchemist in pink, will monitor your activities with a book in her hand. Some highly exciting bonus features are boiling in her cauldron so, create clusters and fill the Sugar Rush meter to release them.

Filling the Sugar Rush Meter will add Wilds to the grid to help you hit more wins. The game comes equipped with the Mix the Elixir Free Round feature with a total of 3 Candy Spells. During this feature, a 9×9 grid is in play. Mixed Candy shuffles symbols on the grid, Sweet Surprise adds between 7 and 12 Wild symbols to the reels while Sugar Bombs destroys between 7 and 15 regular symbols. The feature is played at 3 levels, so keep an eye on the meters to see how you progress. After the first level is completed, the Elixir of Power Bonus feature is activated and you need to pick from chocolate tiles to reveal bottles of magic elixirs until you find 3 matching bottles. Whenever you complete this feature, you will move 1 position on the map containing scattered Treasure Chests and each of them offers a prize of 15% of payouts from the base game.

The gameplay may seem a bit complicated, but once you start playing the Sweet Alchemy slot you will love its entertaining and rewarding bonus features. The maximum win you can hit in a single spin stands at 3,000x your bet, which makes the game worth your time and money for sure.

iSoftBet to Launch Legend of Loki

Norse mythology is obviously an unlimited source of inspiration to software developers and after Asgardian Stones released by NetEnt in February, Legend of Loki by iSoftBet is another title that takes you to the legendary land of the Nordic gods. The 5-reel 20-payline slot revolves around Loki, the wily trickster of Norse mythology who is set to take over Asgard from Odin.

In the upcoming release from the iSoftBet creative kitchen, Loki has some tremendous powers, so you can expect him to trigger an array of features such as Wild Strikes, Stacked Respins and Storm Showers. The game also benefits from an exciting Free Spins feature during which one of the symbols goes sticky and stays in its position for the duration of the bonus game.

So far, we have no further information on the game, but according to the promo video published by the developer, it brags an RTP of 96.23% and promises an epic gaming experience. Get ready to team up with the new ruler of Asgard and you can hit some big wins in April.