If you’ve ever played a bold slot machine, sporting intense graphics, great features, and a pinch of uniqueness, you’ve likely sampled a Thunderkick title. The company, which first launched in 2012, might be one of the younger brands within the gambling scene, but they’re by no means any less impressive. In fact, some would argue they’re fast taking over the top spots of once experiences labels. With this Swedish brand growing all the time, and their games hitting the mark more and more, we thought we should celebrate their domination within the industry. This is why we bring to you several of the best slot machines by Thunderkick, which each of them highlighting the various capabilities of the company, chiefly in their creativity and imagination. Thunderkick may be new(ish) still, but they’ve created a lot of titles for us to choose from.

Turning Totems – The brand really wasn’t kidding with the title Turning Totems, as this 5 reels matrix has a new take on how the symbols should appear, rather than rolling upwards and away, the totems themselves spin, providing new images with each turn. It’s innovative and unique, making us even more excited to place a wager, which so happens to be a low £0.10 bet. Having placed your bet, you’ll have the chance to spin the 11 win lines, in a bid to unlock the bonus game, as well as the re-spins and wilds. If you manage to get three reels re-spinning, aka Thunder Reels, you’ll be granted the bonus game, which is 5 bonus spins. It’s a subtle reward, but given the brilliance of the graphics, we doubt you’ll mind the lower variance. 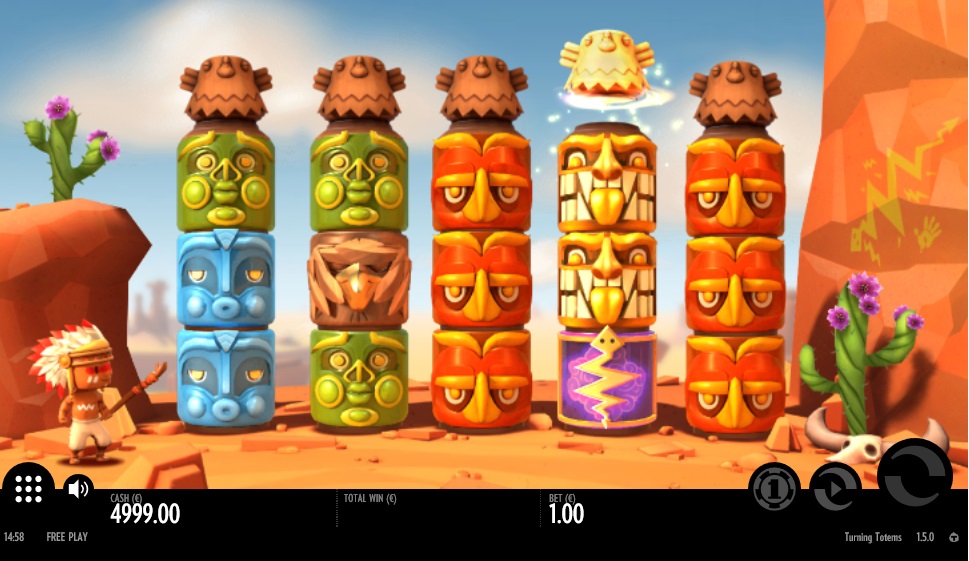 Well of Wonders – Who needs a matrix anyways? Instead, you can simply throw stones down a well and watch new ones spring back to you, or at least that’s how Well of Wonders does it. This whimsical themed slot machine is one of the most unique looking we’ve seen, with an originality few pokies possess these days. You need only match three symbols to get a win, with the winning ones than disappearing while new ones fill their spaces, essentially give you a chance to win again. What is more, whenever you make a win, the multiplier at the bottom of the well will increase, meaning your returns will be improved. Bet £0.10 to get the well bubbling and ready to make some magic!

Sunset Delight – All the warmth and fun of summer comes to life with the 3 reels of this ice cream fun slot machine, titled Sunset Delight. The matrix once again has an individual aesthetic, with the grid replaced by ice cream cones and the scoops that fill them; whenever a new spin is complete, the ice cream scoops will change their flavour. Sometimes you’ll find extra toppings on your scoops, such as a scatter wafer, which will trigger the bonus game, if you can three of them. You’d think that Thunderkick would make their titles more pricey, but they keep on giving you monetary accessibility, with the minimum being a friendly £0.10 once again. There’s only 5 win lines to play for, but that just makes this compact slot all the more delicious.

The Rift – Although we have a floating set of symbols again, The Rift has a more conventional layout, one that we’re more familiar with. Not that it makes this Thunderkick game any less intriguing than the others, as the beautiful aesthetics and features keep on coming. To open The Rift, you’ll need to get three, four or five of the same named symbol, which will then grant you a handful of bonus games. Up to 20 can be won, making this a dark horse of a feature. Or perhaps you’ll want to put that £0.10 to use in unlocking the wilds, which create substituting wins? You have 17 pay lines to work with, giving you a medium variance and volatility title to interact with. Will you close The Rift in time?

Bork the Berzerker – If the title didn’t grab your attention, the way this one armed bandit starts will, as Bork crashed through walls to take us to the grid of the game. As subtle as an anvil, you’ll be greeted with 5 reels and 25 win lines, although once again they’re both housed inside a personalised matrix. Another familiar feature is the low wager, which again is just £0.10, although you can bet higher if you want to. Bork can smash his way through the barriers and grab you up to 50 free games, all thanks to the scatter symbol that keeps on appearing. It would seem that seeing red has worked in Bork’s favour, and now your own.

Toki Time – We go from dark and foreboding to light, airy and playful, in the form of Toki Time. A wild mix of different fictional creatures will spring up out of the ground, and do so every time you play £0.10 and spin the 5 reels. We’d say that this is the cutest looking game to come from Thunderkick, with its features equally as adorable. Watch as llamas extend their necks so that they take over all the reels, gifting you wild re-spins, alongside the ability to win two ways. What this means is that you can bank wins from left to right and right to left, thus increasing your winning chances.

Full Moon Romance – If you’ve ever wondered if werewolves can date, you’re about to get a heartfelt dose of romance, in the form of Thunderkick’s Full Moon Romance. Structured in a classic format, you have 5 reels and 15 win lines, with the aesthetics being from a drive through movie night, with the young couple smooching in the background. For your £0.10 wager, you’ll be able to transition from human to werewolf, thanks to the large Sweetheart symbols, which have a unique cloning feature. They can take over your grid for maximum wins, so be sure to look out for them. Also, if you manage to find up to five full moons, 20 free spins can be yours to take home, much like your wolfy date.