Halloween may only come once a year, but the spirit of this spooky holiday can last all year round, as these spooktacular pokies will show you. Perfect for October, they’re also playable every other day of the year, meaning you can get your spook on whenever you like. What is more, they come from reputable gaming brands, some of which are the most popular for online gaming, and so you can be assured of quality as well as scares. Our guide won’t just point you in the right direction of these slot machines, it’ll also give you a brief overview of what you can expect when you play them for real. Don’t worry, they’re not too scary, just the right amount to keep the spirit of Halloween alive. If you’re comfortable enough, and have your pillow ready to hide behind, we’ll get started.

We begin with arguably the best slot for this time of year; Halloween is a Microgaming title based on the 1970s film with the same name. Known as a classic among horror fans across the world, it embodies everything that the slasher subgenre should have. Presented in a 5 reels format, placed on a grid designed to look like a front porch, this slot machine has a total of 50 winlines for you to land those symbols on. Upon the reels, not only can you land traditional icons, but two bonus features as well, each of which provide a mini game for you to enjoy. Will you find Michael Myers waiting for you at the end, or will you walk away with 500x your initial wager? Bets start at just 0.50 credits, meaning you have affordable fun at your fingertips, just make sure you don’t get caught by Myers.

Moving away from film based slots now, we bring to you Witch’s Brew, a Real Time Gaming title that has all the charm of a witch’s lair; bottles line the shelves, and black cats stalk the halls. All we need is a creepy cackle and the scene would be perfectly set. It’s the ideal partner to get you in the mood for Halloween, even in the middle of summer! Housed within 5 reels, you’ll have 25 paylines of variance to work with, in an attempt to trigger all the game features, which include a unique bonus round. This mini level is a set of free spins, sure to put you in a tizz when those witches potions kick in. If you want to join this latest coven, you’ll need to be willing to cross their palms with coins price at 0.01 credits or higher, otherwise it’s the play for fun option for you.

The witch theme continues, though now we’re given three lovely ladies to admire as we spin, courtesy of Playtech, another gambling giant. Promising a jackpot of up to 10,000 credits, this is a wickedly enticing slot machine that delivers you 20 winlines of creepy entertainment, alongside those 5 standard reels. You only need to wager 0.01 credit and you’ll be able to start appreciating the textural graphics of this title, arguably what makes it one of Playtech’s best Halloween surprises. And should the aesthetics not interest you, maybe the bonus game will, in which you receive as many as 20 free games, as well as a tempting multiplier to ramp those wins up. It goes to show that even the more creepy holidays can hold good fortune for us, if we just know where to look. 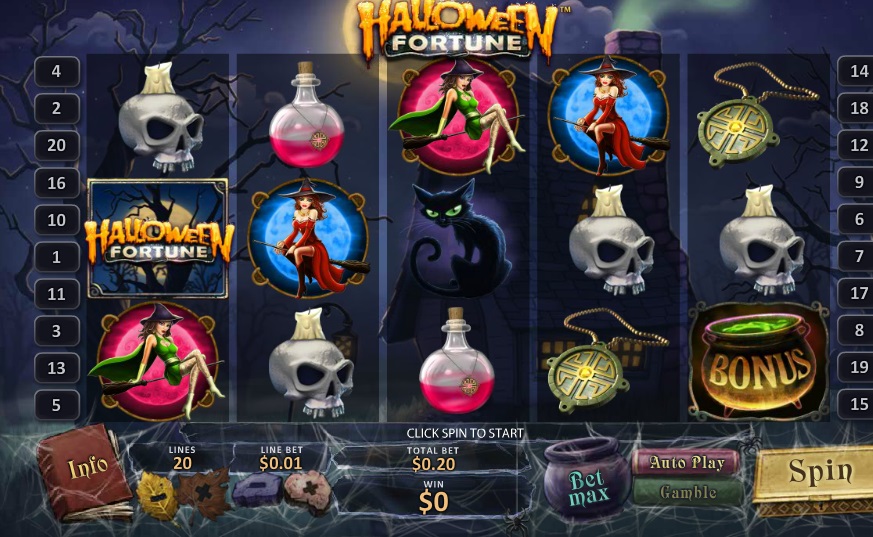 Given the name, you’d expect a classic looking design, with orange pumpkins and scary imagery. Well, you couldn’t be further from the truth; this is a Yggdrasil game, and so nothing is conventional. Instead, you’re given 5 reels designed like the Day of the Dead Festival, decorated with neon bright colours and quirky looking skulls. These symbols can land on any one of the 20 winlines, generating wins that can be worth 375x what you staked, even if you’re minimum bet was only 0.20 credits. Furthermore, you have the chance to not only score standard cash prizes, but free games as well, meaning there’s enough variety here to keep you spinning until the sun rises. Just make sure not to wake the dead with all that smashing – you don’t want to make them angry on their special day…!

In a similar style to Pumpkin Smash, Play’N Go gives us Grim Muerto, a Day of the Dead slot machine that has colours dominating the 5 reels matrix. Inside of all these wonderful colours are a total of 20 fixed paylines, on which you can wager a tiny stake of just 0.20 credits. If you play for real money, you’ll be able to spin your way to free spins and extra chances, the latter of which allows you to spin again, in an attempt to award you with a win. Delightfully rich in character and uniqueness, it’s a slot machine that works well for Halloween, but for any other celebration as well. You’ll also note that some of the reels will become highlighted, leading to extra wilds being placed onto the grid, further enhancing your chances of a winning combination.

We circle back to Microgaming now, this time with their title Lucky Witch. Although not as modern looking as some of their other one armed bandits, this online pokie has a vintage interface that is perfect for capturing the yesteryears of Halloween. Confined to 5 reels and 15 winlines, it’s a compact slot, but one that offers decent enough rewards for just 0.01 per spin. Not only can you play to get your hands on the bonus spins, a staple feature that all slots should have, but you can also play for the Mystery Bonus. Should those two offerings not whet your appetite, there’s always a couple more mini games to get you in the mood. For saying this is one of the older Halloween games, it’s the one title that has the most variance of all the games mentioned thus far.