For over 10 years now, BetSoft has been wowing us with a series of progressively impressive games. Even back in 2006, when they first started out, the quality of their products was considerable, though nothing like they are now. Their graphic artists have a passion for 3D aesthetics, which is why a lot of their content is so immersive. To see the true colourful nature of this developer, we’ve compiled a list of the top BetSoft slot machines. As you’ll see for yourselves, there’s a lot of variance in the titles, and we don’t just mean the diversity of the game features.

Blood Eternal – You’ll want to take a bite out of this blood soaked vampire title, called Blood Eternal. Themed on romantic vampires, this is a fine example of the artwork that BetSoft continuously create. Inside the 5 reels matrix, there’s 30 win lines for you to work with, giving you a medium volatility title. These winlines can’t be changed and so are fixed into place. The top key features of this particular slot are the wilds and free spins, with the two coming together and creating a unique feature. All you need for that to happen is a vampire to land next to a human symbol. If you decide to play as a pay for real player, you’ll need to wager at least £0.30 per game. 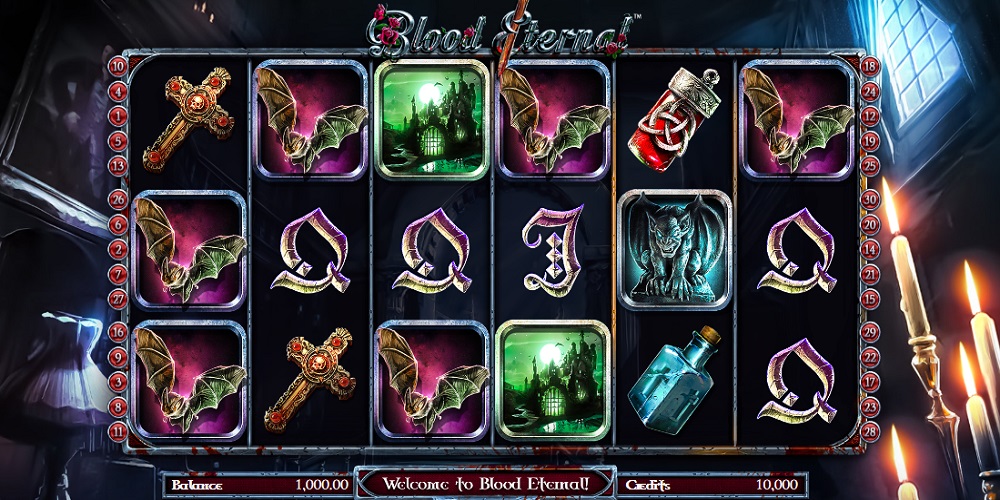 Fire and Steel – We visit one of BetSoft’s older slots now, but by no means one of their worst; Fire and Steel is a great example of how detailed the titles have always been. Just look at those graphics, the characters almost look real! This is a fantasy based slot machine, sporting 20 winlines, as well as unusual shaped grid of 3x4x5x4x3. The dramatic atmosphere of this pokie is matched by the game features, with the Swordsman and Shieldmaiden shooting beams of light across the grid, to turn tiles into wilds. How exciting, and all for just £0.20! But there’s more, if these beams of light cross one another, you’ll be granted 10 free games.

Giovanni’s Gems – The smiling happy face of Giovanni is going to guide you through this one armed bandit, with the rewards being considerable. Just drop that initial wager of £0.30 and you can get started. Once you’ve paid to play, you’ll have a floating grid open to you, comprised of 7 reels, making this a high variance slot machine indeed. Due to the floating nature of the matrix, you get exploding wins: when you form a combination, it’ll explode and be replaced by another, giving you an increased chance of winning again. There’s also free games thrown into the mix, as well coal that can turn into diamonds.

Fa-Fa Twins – Opening with a thrilling video clip, Fa-Fa Wins is an oriental masterpiece, filled with rounded imagery and vivid colours. For your money, which begins at £0.25, you get 243 ways to win, giving you an increased chance of landing a winning combination. As for the tiles you can land on these spaces, there’s only the wild high in value. However, after every win you can gamble your winnings to increase them in size. It’s a risk, but you have the Fa-Fa Twins on your side, so anything is possible! What is more, there’s connected reels that land the same results, with their location changing every spin.

Great 88 – We remain in the orient for now, but this time playing with the twilight serenity of Great 88. Set inside a peaceful Chinese garden, this is a relaxed game, but one that has many high value features. If you’re looking to play for real cash, a minimum bet of £0.30 will be needed. Thereafter, you can spin the 5 reels in the hopes of triggering the Lucky Boxes feature, an immersive way of obtaining massive returns. You’ll need to collect at least three of them for the feature to activate, with the prize inside randomly selected; sometimes it’ll start the bonus wheel, other times a set of free spins. You won’t know what you’re getting, but it’ll always be exceptional.

Frakenslot’s Monster – Remember Frankenstein and his monster? Well, Frankenslot is his brother. He lives inside the horror themed reels of this pokie, able to play with his experiments across 20 winlines. Sometimes you’ll land normal valued symbols for your bet of £0.20, but other times you obtain three scatters, launching a total of 8 free games. There’s even a creepy bonus round for you to trigger, though we wouldn’t want to spoil the surprise for you…! Just like all the other BetSoft slots, it has the markers of exceptional aesthetics, with the game having a foreboding atmosphere, fashioned from Pixar styled imagery.

Fruit Zen – Here is proof that even the most classic fruit machine slot can be exciting; Fruit Zen is a pokie that has spirit and texture. And yet, it provides this inside the conventions of vintage slot machines, where fruits are the main symbols served. To keep these 10 winlines in-keeping with the genre of classic titles, there are no special features to engage with. However, you can play the symbols both ways, meaning winnings go from left to right and right to left. Also, you have an extremely accessible first wager of £0.10, making this one for budget customers.

Kawaii Kitty – Big eyes, bushy tails and a whole lot of purring is coming your way, thanks to the Kawaii Kitty. This super cute and cuddly slot has some of the most interactive, and adorable, graphics you’ll find within the community. Although housed in a 10 winlines format, there’s still quite a lot going on, like balls of yarn that roll around the page. These wilds can expand, triggering respins, to help make the gameplay that little more entertaining. To keep this kitty in a good mood, you’ll want to pay it a fee of £0.10, then you’ll be allowed to let the low variance gameplay commence.