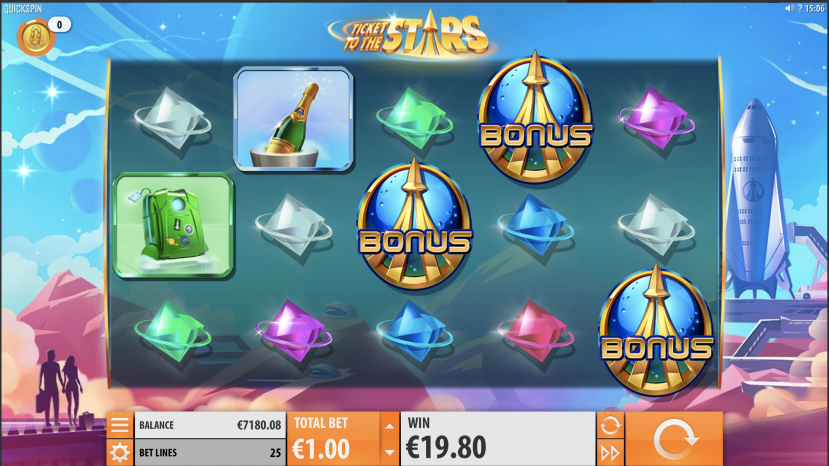 Exploration of the universe has been a curiosity we’ve entertained for centuries – even before we could take to the skies, we wanted to know what was out there. Since launching into air travel, countless individuals have taken the leap into the dark recesses of space, making discoveries that have shaped our history, science, and beyond. For those left behind on earth, there’s been little for us to do… or so that was the case, until now.

Ticket to the Stars is an upcoming game from Quickspin, due for release early February. This 25 winlines and 5 reels game is decorated with postmodern aesthetics, harking back to the cartoon renderings of Meet the Jepsons. Unlike with us mere earthlings, confined to life only on this planet, this space age slot machine takes place in a universe where space travel for everyone is a luxury commodity. You can travel from planet to planet to experience the holiday of a lifetime.

Purchasing your ticket couldn’t be simpler, as this Quickspin pokie adheres to the same rules that the brand’s other products do as well: a wager priced between 0.25 and 100 credits will secure your place. From then onwards, the reels can open up in a range of ways, with the winlines able to unlock several unique bonus features. Included among the features are free spins and multipliers – the staple mechanics of any good one armed bandit.

Whenever you create a winning combination, the Swooping Reels will kick in. This is an exclusive design trait, but one that’s based on the cascading reels you’ve likely seen in other games previously. All you need to do is keep lining up the wins and the winning symbols will disappear off of the screen, while the non-winning ones stay in place. This mechanic allows for players to bag some truly out of this world wins, sometimes as much as x10,000 your bet. Ticket to the Stars is all about those big money gains, as its 96.52% RTP highlights – the game wants you to win, the bigger the better.

Don’t be fooled into a false sense of security though, while the game has a high return to player rate, this is still a high variance playthrough. Basic combos of the gemstones isn’t going to cut it, for the real victories you need to be bagging five of a kind of the unique symbols, like the flight attendant, pilot, etc. It would also serve you well to match up the golden wild of the game, as substituting wilds can generate juicier rewards. Watch the wild stack up across the reels for that ultimate mile high rush.

The final piece of the puzzle is the free spins round, in which you can win up to 25 waves of free gaming. The unlimited multipliers you can gain throughout the base game still apply here, meaning that increase every third win is going to beef up your returns. Not forgetting that you can also gain extra spins as you play. If a player is going to win the maximum amount possible, this is likely where they’ll do it!

Playable on both mobile and desktop devices, users will soon be able to experience space travel like never before. Should you need a slice of the action before the release date, Quickspin has a gameplay trailer you can access via their homepage. Are you ready for some exploration? Quickspin certainly hopes so!