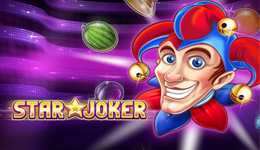 The good people of Play’n Go had a very successful year, so they decided to finish 2018 with a game that presents a perfect combination of a classic slot machine and a modern video slot. Visually impressive, the 2018 release features five reels, three rows and benefits from 10 fixed paylines, which pay left to right, starting from the leftmost reel, with three of a kind being the minimum for landing payouts. The central figure of the Play’n Go title is the Joker, hence the name of the game. Try to land as many smiling Jokers as you can, because three of them will get you the Free Spins feature with up to 20 freebies and two types of Wilds.

The visuals are old-school, but excellent, while the soundtrack will make you feel as if you are sitting in a casino and playing one of those one-armed bandits, especially when you see all those Lucky Sevens, Diamonds, Stars, Cherries, Plums and other fruit that is used on these kinds of games. Playable from $0.10 per spin, Star Joker offers a mouthwatering maximum payout of 5,000 times the bet. Since the maximum possible bet is set at $100, you could walk away with $500,000 in cash.

Star Joker has seen the light of day on 19th December and still has to find its place under the sun, but, according to Johan Törnqvist, CEO of Play’n Go, the 2018 release capped off a great year for the company.

This game is another quality addition to our portfolio, and the interactive element is a great way to teach players knowledge we may sometimes take for granted in this industry and will help players play responsibly.

2018 has been a great year for us; we have released a number of high-profile titles that have performed exceedingly well and, with it’s gameplay and interactive elements, this game will be no different.

The reels are set on a purple, sparkling background and the 2018 release really looks bright and shiny. We are positive that the fans of fruit machines will recognise all of the symbols that populate the reels. The golden Star is the Wild that substitutes for all symbols and also pays the most, 500 times the bet for five of a kind. There will be Lucky Sevens, Diamonds, Bells, Watermelons, Oranges, Plums, Strawberries and Cherries to land, while the Joker is the Scatter that triggers the Free Spins feature. Also, the Joker becomes a Wild during freebies.

Once you land three Joker Scatters on the reels, you will trigger the Free Spins feature and get 10 free spins. The best thing about the feature is that during freebies the Joker becomes a Golden Joker Wild and also substitutes for all regular symbols, meaning that gamers get two types of Wilds on the reels, which will help them land winning combinations more easily. That is not all, because it is possible to retrigger the feature by landing three additional Scatters, which will also get you 10 free spins. Punters are looking at possible 20 freebies in total.

One more interesting fact about Star Joker is that it offers a short tutorial on how to play video slots, so mere beginners will have no trouble at all understanding the rules of the game. Both slot machine fans and lovers of modern video slots will find something to play for in the Play’n Go title. With a RTP of 96%, this is a low variance slot that offers a maximum possible payout of 5,000 times the bet.