, one of the leading software developers in the world, decided to start 2018 with Satsumo’s Revenge, a release in which a fruit machine meets martial arts.

Satsumo’s Revenge is a 5-reel 25-payline video slot themed on martial arts, but instead of people, the Playtech release features anthropomorphised fruits. The reels, set in a wooden frame within a Japanese dojo, are home to oranges, strawberries, blueberries, cherries and limes, which are responsible for high-value awards. The lower-ends of the paytable are made up by traditional playing card symbols.

The graphics are rather good with animated fruits and the grandmaster of martial arts standing on the right-hand side of the screen to add Wilds and multipliers to the reels. Cartoon-like animations are followed by an Oriental music score that will transfer you directly to the Far East. 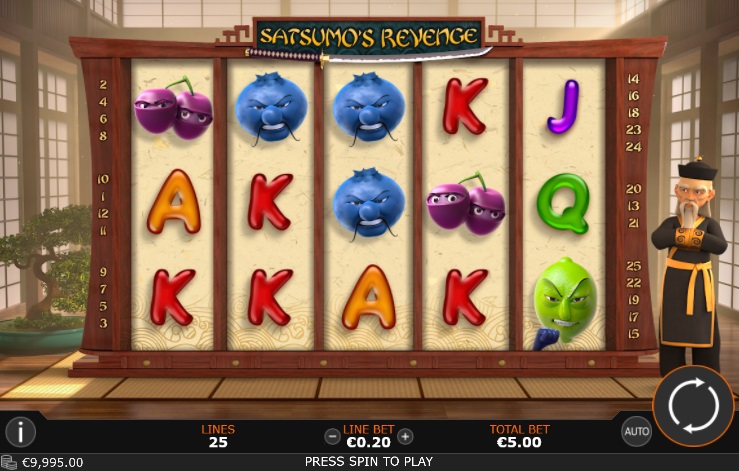 Look out for blueberries as they stand for Scatters. They show up only on the reels 1 and 5 and when they land on the reels simultaneously, the Fighting Free Games feature is triggered. You will be asked to pick an opponent to play Rock, Papers, Scissors against. Each of the competitors is given 5 lives and for every round you win, you will be awarded 1 free spin with a Sticky Wild symbol. If you draw, you will get only 1 free spins and if you lose, you lose a life. If your opponent loses all his lives, you get an extra free spin at the end. To make the most of the round, it is important to win a round in the beginning and get Sticky Wild. Afterwards, you can draw to add more free spins during which Wild will stay in its position.

The top paying symbols is Satsumo orange awarding 1,000 coins for a five of a kind combination. Thanks to multipliers going up to 3x and Wild Reels, you can hit some hefty wins throughout the game. The game is playable from only €0.25 per spin and a total stake can be as much as €500 which will attract high-rollers too. Satsumo’s Revenge is available for desktop and mobile play.