Let’s face it, folks, 2017 has been somewhat of a bleak year, with the weight of politics and social circumstances getting us down. Red Tiger Gaming have seen the impact it’s had on its fans and has decided to do something about it: they’ve created a hilarious new pokie called Rocket Men. From just the name alone, you may be wondering what makes this slot machine different from the rest, to do with Donald Trump and Kim Jong Un. That’s right, we have a satirical one armed bandit to see you through any dark times ahead, loaded with variance and volatility to boot.

The aesthetic of this is comical and cartoony, with inspiration clearly having come from the likes of Rick and Morty and South Park. Sporting a bright, colourful and sometimes inappropriate interface, Rocket Men is a game that doesn’t hold back. This is true not only in its looks but in its game features as well, which is part of the reason why Red Tiger Gaming is so renowned. They’re not afraid to push the envelope if it means keeping their gamers happy and coming back for more.

Despite the fact the label started out in 2014, in a short amount of time they’ve made themselves known for innovative gaming and high end graphics, with the technology allowing mobile gaming. All of this presents customers with a software developer they can get behind and follow, with their Western and Asian genres helping to bridge gaps across the globe.

This successful combination is what we see at play on the 5 reels of Rocket Men, with as many as 20 winlines available; all players will need is to play that first 0.20 credits wager. From there on in, there’ll be the standard paytable of rewards, in which gamers can gain considerable returns. However, it’s the bonus rounds that really blast Rocket Men into its own league. 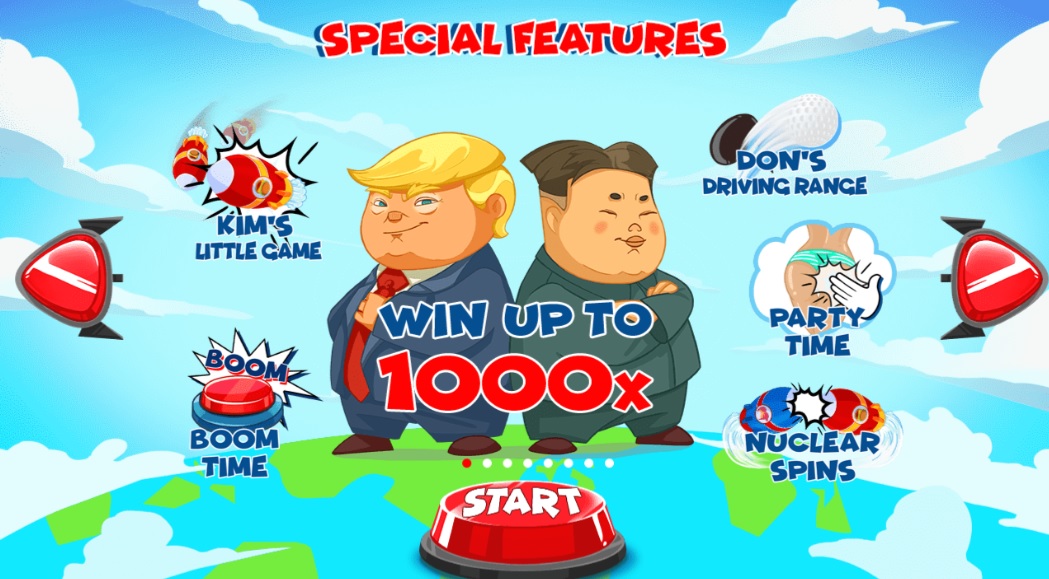 There’s five extras in total, with some of them more hands on and interactive than others, such as Party Time, which is a Trump based feature. In this round, players will have to slap the bottoms of bikini babes in order to win prizes. The equivalent for Kim Jong Un comes in the form of Boom Time, which sees the dictator select countries to blow up, with the result being piles of money. Although the content is a little on the nose, and unsubtle in its opinions, it creates a fun and entertaining environment for users to enjoy.

Arguably, the biggest prize anyone can win is the x1,000 of their initial wager, making this a hard hitter when it comes to prize money. The same level of high rewards can be seen in Red Tiger Gaming’s already impressive portfolio, with several new games having been launched recently too, such as Reel Heist and Treasure Mine. What is more, two new slot machines are down to be unveiled soon, to keep the heat on for all Red Tiger fans.

If you’re interested in playing Rocket Men, to see who would really win if it came down to Trump vs Kim Jong Un, you can either visit Red Tiger Gaming itself or you can visit one of their casinos. Players will be happy to note that there’s demo versions available, and so you can explode and spank your way to the top, as well as triggering explosive wilds along the way. This looks like it’s going to be one of the brand’s most intense and funny games to date.