Many of us know the story of Snow White and the Seven Dwarves from our childhoods, with the raven haired beauty most recognisable in her yellow, red and blue outfit. Some of you may even know of the character from Rammstein’s Sonne music video, in which Snow White took on a very different role to her usual one. Well, now it’s time to witness Red Tiger Gaming’s take on this fair maiden, in the game Snow Wild and the Seven Features.

When we first read the name, we were hesitant, but once you load up the title and test out the features for yourselves, you soon realise that a wonderfully textural revamp has been created here. Brightly decorated, sporting familiar imagery with a rock chic edge, this modern take on a classic is one you won’t soon forget. Gone is the shy princess we’ve come to know, for in her place is a tattooed beauty who has seven rough around the edges friends to watch her back. 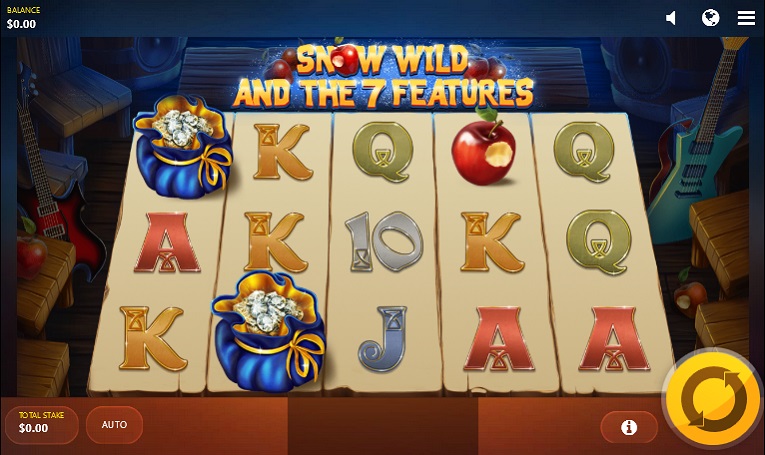 Although different to most princess themes, we love how outside the box Red Tiger have gone, and not just in aesthetics but in gameplay too. For those who want to play for real cash, a small fee of 0.20 credits will gain you access to a paytable filled with mini games; in all, there’s seven bonus features (as the name of the slot would suggest). And that’s not even including the standard wins that the smaller value symbols can generate.

The game will unfold upon a 3×5 matrix, consisting of 5 reels and 40 fixed winlines, with between three and five symbols needed in order to create a win; pretty basic rules for any online pokie. Even though all of the symbols can bring you good fortune, it’s Snow Wild we really want to see, as her ruby red lips will unlock the bonus wheel. For that to happen, she’ll need to appear on the grid, blowing at least three kisses so that they land on any of the reels. If this should happen, you’ll be able to proceed to the bonus wheel.

This, as you may have guessed, is how you can unlock one of those seven features, with each of them related to one of Snow Wild’s seven friends. So as not to spoil the surprise of the prizes that can be won, we’ll only hint at the possible returns rather than going into great detail. Some of the mini games will create wild reels, while others will grant you instant wins, not forgetting the various multipliers and respins that can also come from her handy friends.

Snow Wild and the Seven Features is a fast paced one armed bandit that delivers high variance and medium volatility, ensuring that there’s a sense of challenge when playing for the goods. Despite not being the easiest of games to win on, we find this new release enchanting in its uniqueness.

This isn’t the only new title that’s been launched by the label, with several others, such as Pocket Men and Wild Nords, available via the brand’s own website. You can opt in to play for free there, or you can visit your favourite Red Tiger casino and launch a cash playthrough of your own.