As you well know, Red Tiger Gaming isn’t an iGaming brand to sit back and let other labels do the hard work, they’re right in the middle of the action, creating as many titles as they can. Over the last few months, numerous new releases have come to our attention, one of which is called Cinderella’s Ball. Dazzling with whimsical wonder, it’s one of the best means of entertainment for those of you who have a soft spot for Disney and fairy tales.

In this retelling of the story, customers are presented with a 3×5 grid, which consists of 20 fixed winlines. The main aim of this title is to match as many of the same symbols as possible, with various combinations resulting in an array of special features; one thing’s for certain, Red Tiger haven’t skimp on the variance of this pokie. In total there’s four mini games to activate during your playthrough, though even if you don’t manage this, the standard paytable will be more than generous in its returns. 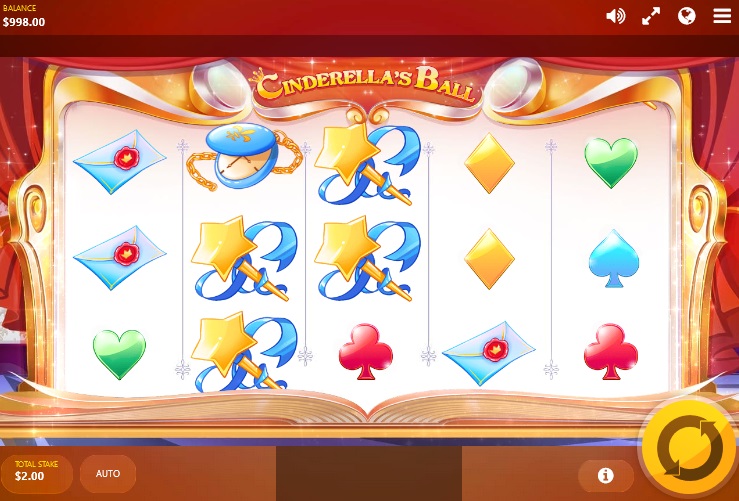 The appearance of this slot machine is a lot more simplistic than some of the other new slot releases we’ve seen of late, with Red Tiger having chosen to create a childlike aesthetic. While some may think it too crudely done, we find that it matches the fairy tale well, as it brings together the love of stories we have as children and marries it with our adult experiences. What is more, this type of style is one that the brand often utilises, as it allows a blanket coverage of both male and female gamers without heavily gendering a game. This can be seen in Cinderella’s Ball, where the colours have been kept as neutral as possible, so as not to put off potential users.

If you wish to get your hands on some magical features, the crown scroll is one that’ll provide you with a pick me bonus, with three of a kind symbols needed to begin this mini bonus. Inside of the scrolls you pick from the reels are multipliers of increasing size, with the amount reaching dizzying heights of 500x. If you can match three of the same multipliers, you’ll be awarded that amount.

Should you be looking for conventional rewards, this slot has those too, as the free spins demonstrate. The castle icon is how you unlock the feature, with a varying number of spins gifted to you depending on how many castles are matched. Of course, there’s a couple more extras available as well, with a fee of no more than 0.20 credits needed in order to spin the reels. However, should that sum of money prove too steep, you can play the pokie free of charge from Red Tiger Gaming’s own website. The magic will still be there, but it’ll just be confined to the realms of fiction instead of being able to come to life.

Launched back in late 2017, Cinderella’s Ball is a HD slot machine that can play on multiple devices, including both of the major brands Apple and Android. In regards to the accessibility and playability of Cinderella’s Ball, this is the same as the other activities available from the brand, with several newer products having been released recently. They all gift users a slice of something different, but in a way that only Red Tiger Gaming can provide.