Unless you’ve been a long time fan of Quickspin, you probably have no clue that their latest game release making news around the world is actually one from their vaults. Back when the company first started, their very first one armed bandit was Rapunzel’s Tower, a 5 reels slot machine that captured the magical world in which princesses have long golden locks. Sadly however, the game was eventually removed from the market many years ago, and so the masses have been without this pokie ever since.

Fortunately for you all, the brand has remastered this beauty so that it can been seen in all its glory, polished off by a HTML5 finish. Despite the vast improvement in graphics, Quickspin has chosen a more traditionally animated looking interface, which feels a lot more in keeping with the storybook charm that tales such as this are all about. We have no doubt that if you love classic Disney, you’re going to be glued to your devices when playing this one.

Presented in this brightly coloured matrix of 3×5, players will find an array of game features, both standard and bonus, to ensure that thrills are had throughout the game. Any of these symbols can land on the 20 winline format, though it’ll take luck to create those three to five combinations that’ll bag you coins. For a low stake of 0.20 credits, customers will be able to start on their very own quest to help darling Rapunzel; this is the base bet, therefore making this pokie accessible for budget players as well as highrollers. 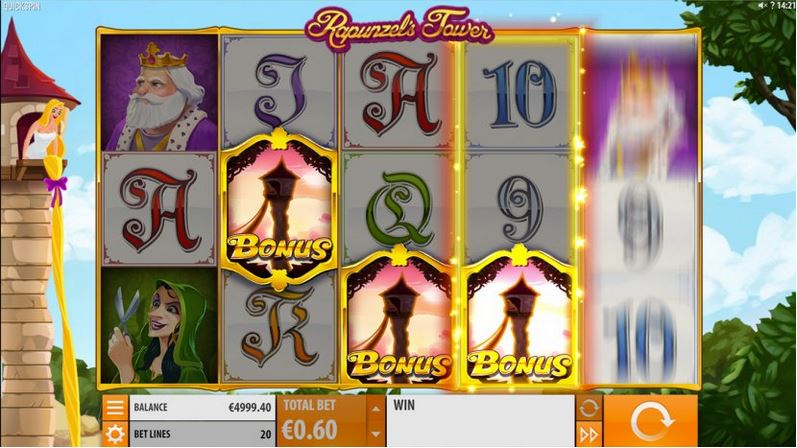 Along the way, there’s two main features that can bring in stacks of money, chiefly that of the Respin Wilds Stick Until You Win and the Free Spins. If you find three or more of the bow tied blonde hair icons, aka the respin wilds, you’ll activate the accompanying bonus, in which the reels will keep respinning until a win is made. As for the extra games, they’re triggered by the tower symbol, with 10 games initially given and a further 8 gifted to you if you manage to retrigger the bonus. As these spins countdown, and you keep aiming for the top of that tower, you’ll watch as the prince climbs the stony walls in a bid to meet his love.

To keep this new one armed bandit as flexible for customers as possible, Quickspin has made it so that you can connect via your portable devices, no matter whether they’re Android or Apple, mobile or tablet. You know what this means, right? You’ll be able to save Rapunzel at any time of the day, whenever the mood takes you, meaning you walk away the hero of this popular story.

In spite of only having been released on December 12th, Rapunzel’s Tower has already proven a hit with gamers, with many already looking forward to the next installment from the label. Should you visit their site, you’ll see that a title called Pied Piper is said to be ‘coming soon’. Until then, you can spin your way to the princess, or choose to look at any of the other games displayed on this highly awarded brands portfolio.