Quickspin, a gaming brand that’s regarded as one of the leading brands in Swedish slot machines, has just released a brand new online game. This new title, which is part of the Playtech Group label, breathes new life into the legend of King Arthur. To illustrate the whimsy and magic of this game, the title given is Mighty Arthur.

Although there’s been many new interpretations of Arthur in popular culture over the years, Quickspin has chosen the image of him as a king to decorate their 3×5 matrix. Accompanying the 5 reels of this pokie, there’s a total of 20 win lines, which are fixed into place, resulting in a minimum bet of 0.25 credits.

Not only is Arthur the focus of the game, but he’s also one of the feature symbols of the paytable, with the iconic figure able to dominate three spaces upon the central reel. When this happens, Arthur will be able to turn other reels into wild symbols as well, meaning further big wins are coming your way.

It isn’t just Arthur that holds power within the format of this game though, as Merlin is also a wild symbol, referred to as the Random Wild. Unlike Arthur, Merlin can appear on any of the reels, with him generating up to six randomly placed wilds on the pay lines. In addition to these two special features, there’s also a bonus game.

As is common with many Quickspin titles, and other slots in general, the bonus tiles give users as many as 10 free spins. However, you must first be able to land them on the first, second, and third reels for that to occur. Thereafter, players have the standard payouts of the paytable, all inside a detailed HTML5 design.

The array of immersive graphics that have been used create a rich game, one which can be loaded on multiple devices, therefore making connecting with Quickspin easier. No matter if you’re on mobile or desktop, the King and his court will resume whenever you make that first wager and roll those reels. 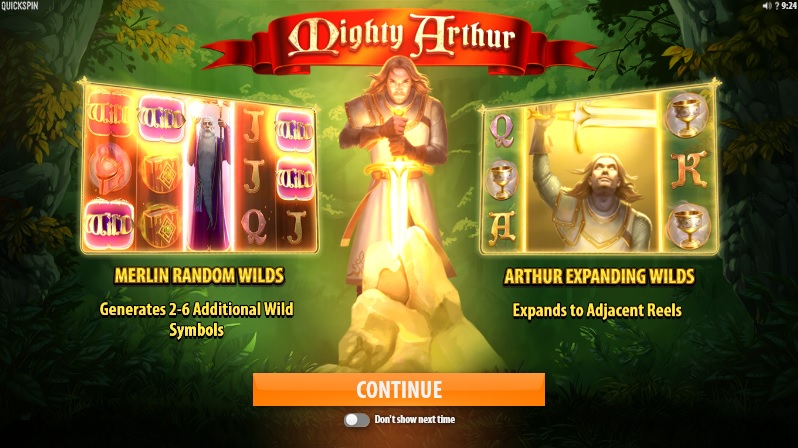 In addition to the graphics, Mighty Arthur also includes the innovative Achievements Engine, an exclusive feature that Quickspin themselves created. This unique attribute allows a more entertaining experience for all customers, as well as the chance of increased rewards and returns.

When we spoke to Quickspin’s CEO, Daniel Lindberg, this is what he had to say:

Mighty Arthur promises to be one of our most magical slots yet, with stunning graphics and an eye-catching storyline which will have widespread appeal. Players across multiple markets will be rewarded with great gameplay and the riches of legend thanks to Arthur and Merlin.

This new release of Mighty Arthur adds to a growing collection of new titles, such as Fairy Gate, Hot Sync, and Wins of Fortune, to name but a few. The fact that Quickspin, which was founded in 2011, can still create such vivid games is a credit to them, and part of the reason Playtech purchased the brand back in 2016. Now licensed across multiple jurisdictions, customers are able to play this award winning content from numerous leading operators.