If you think that Pragmatic Play will be slowing down any time soon, you got another thing coming. The developer is far from being done for the season, and two new slots are coming our way – Triple Jokers and 5 Lions Gold. Looking back, it seems that the provider’s creative department has not had a moment of rest in the past few months. 2018 ended with the bonus-packed Leprechaun Carol while 2019 has started full steam ahead, leaving a trail of 10 slots, including Caishen’s Cash, The Dog House, and Egyptian Fortunes – all deemed as games with the highest potential and the best new Pragmatic Play slots for May 2019. 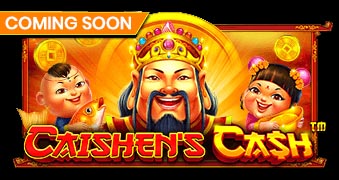 Caishen’s Cash is announced for May 14, however, the 2017 edition, Caishen’s Gold, has already set the standards high, thanks to the high RTP rate, medium volatility, and 380,000 coins payout potential. Although the game is yet to be officially released, demo option is available, and judging by the test run, the 2019 sequel has all the potential to exceed its predecessor.

The structure is the same – 5×3 reel grid and 243 paylines, with a somewhat lower return to the player percentage (96.50% as opposed to 97.08% generated by Caishen’s Gold). There are four jackpots, each with a fixed multiplying value revealed in the bonus game:

The Jackpot Bonus is randomly triggered when the Wild icon lands on the reels 2, 3 and 4, activating a picking game during which the first 3 matched icons determine which of the jackpots will be won.

A combination of 6 or more Money icons will present the players with a choice between Free Spins or the re-triggerable Money Respin bonus. Each of the two options has its own advantages. Free Spins, for example, are played with just the high-value symbols, while the Money Respins are played on the alternate set of reels featuring Gold, Red, and Green Money icons only. 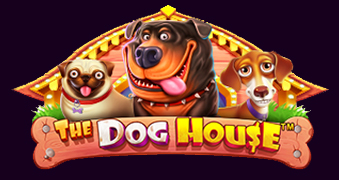 Even if you considered yourself a cat person, you will not be able to resist these pups’ loving eyes – especially with a payout potential of x6,500 your stake. On a pressed bet, the total win could amount to $650,000 which is enough to make this slot a gambler’s best friend.

Played on 5×3 reel grid and 20-paylines, The Dog House introduces random multipliers awarded when Wild symbols land on the same reel (2, 3 or 4). The Dog House Wilds can substitute all icons except for the Bonus Paw symbol, multiplying the value of all the combinations they complete. If more than one Wild form the winning string, the multiplying values will be added together.

The Paw symbol is limited to reels 1, 3, and 5. Three of these icons initiate Free Spins, the number of which is determined by a spin on the 3×3 grid. The value on all three lines will be added, providing the player with the final count of extra rounds. While the spins are in progress, the Wild icons that appear on the screen will remain locked on their landing positions. Just like in the base game, any winning combinations that contain a Wild will be multiplied by a random value. The Paw cannot appear while the Free Spins are active, which means that this feature cannot be re-activated.

Those of you old enough to remember a Hollywood classic, The Ten Commandments, will without a doubt notice the startling resemblance between Egyptian Fortune’s featuring character and Yul Brunner’s Ramesses II. Egyptian Fortunes slot is a typical representative of its genre, with Ancient Egyptian deities as the high-value icons, the Two-Headed Serpent as the Wild, and the Pyramid with the Rising Sun as the Bonus icon.

When combined in a certain way, the Pharaoh and other symbols can produce the Energy Spins, which are awarded on top of the payout. The Energy Spins are equivalent to the Free Spins and the players will not be required to submit any bets for as long as the session is active. New rounds can be won while the feature is active, and the players will even be able to trigger the Free Spins Feature while the Energy rounds are running. All winnings generated from the Energy session are added together and paid when the rounds are completed.

Bonus symbol lands on reels 1, 3 and 5. In addition to generating x1 of the total player’s bet, Pyramid also unlocks the Free Spins feature with 6 extra rounds. The entire session is played with only 3 high-paying icons, randomly selected before the spins are initiated. The Bonus and the Wild icons are, of course except, but the latter can still appear on reels 2 and 4. Energy Spins cannot be triggered during the Free Spins nor can the players unlock additional Free Spins while the feature is in progress.
April 27, 2019Posted in News by Rob • No Comments
[B