When spring-time rolls around, and the snow starts to melt, our moods immediately shoots up. Not just because the cold is over, but because it also means a new batch of games is soon here! As always, Pragmatic Play love to give us a few early treats! So today, we will take a look at three Pragmatic Play slots that you can play early! 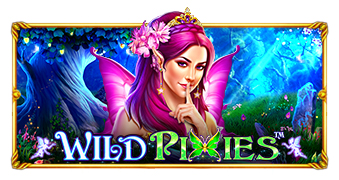 The first one we will look at is Wild Pixies. It is set in a deep, mysterious forest, full of magic and mystery. You can notice pixies slowly flying by the trees, while the foliage slowly twists along with the wind. The screen transition into the special feature is beautiful, as are all the pixie symbol animations!

Collect three Scatters on the first, third and fifth reel to activate the ‘Roaming Wilds Free Spins feature’. If a player is missing a single Scatter to trigger the bonus turns, a Scatter Nudge may push a gemstone into the correct position.

When the special feature fires, gamblers start with 8 free spins. Above the reels, three pairs of empty spaces appear. These are filled each time a natural Wild lands on the playing field during the free spins.

When each pair is completed, it creates two sticky, moving Wilds. These Wilds will remain on the reels until the bonus ends, but will change positions every turn. With three pairs, a maximum of six roaming Wilds can be present on the reels.

Furthermore, each time a pair of empty spaces is filled up, two additional free spins are awarded.

Wild Pixies has a medium-high variance and an RTP of 96.5%. The jackpot is worth 3500x your total stake. To get it, you would have to get a five-of-a-kind win on each free spin. 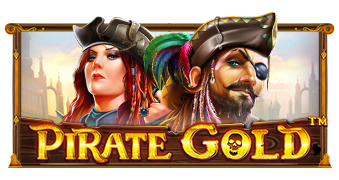 The next Pragmatic Play offering is Pirate Gold. Join an expedition of rowdy buccaneers who plan to sail the seas and make themselves rich! This may be one of the best looking games the developer has made to date.

Gorgeous sun-rays piercing the cloudy sky, while said clouds race off into the distance. The water’s movement is quite realistic, and causes the ships to move a little. All the while, the village is shrouded in fog, and is just waking up to a cool morning. It certainly feels like the start of an adventure to us!

On the reels, you will find various coins, a hook-hand, a spyglass, and a treasure map. Higher paying icons include a mighty ship, a colourful parrot, as well as a female and male pirate. A treasure chest bursting full of loot is the Wild. A glowing compass is the Scatters, and is used to activate the special feature.

Collect three Scatters on the second, third and fourth reel at the same time to win 10 free spins. While the bonus is active, the male and female pirate transform into Wilds.

If three Scatters land on the playing field during the free turns, ten more extra spins are granted. There is no upper limit on how many times you can re-trigger the special feature in this way.

Occasionally, brown money bags may appear on the playing field. Each one can appear with a pre-selected amount of money, or with the value of the minor and major fixed jackpots. When eight or more appear on the board at the same time, they activate the Lucky Treasure Bag bonus.

During this special feature, all normal icons disappear from the playing field. Instead, only money bags, re-trigger and multiplier symbols, as well as blank spaces remain. Players get three re-spins, and the counter resets each time another money bag lands on the reels.

A chest with a golden skull is the retrigger bonus. Picking it up guarantees another re-spins bonus will be played after the initial one finishes.

This continues until no more re-spins remain, or all positions on the board have a money bag.

Pirate Gold is a highly volatile title with an RTP of 96.5%. The developers boast the maximum win of 32,270x your total stake. 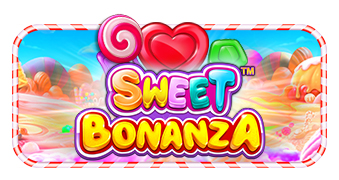 The last game we will be taking a look at today is perfect for gamblers with a sweet tooth! Say hello to Sweet Bonanza, set in a magical candy-land where the background is just as delicious as the wins!

Ground made out of cotton candy and ice-cream mountains dominate the landscape. You do have some useful landmarks, like the donut hill, or the hard candy shell in the distance! All the while, the clouds lazily fly past this wonderland, not daring to ruin paradise by raining.

After we finished trying to lick our screen for goodies, we discovered there were actual reels and symbols in this title. Icons are split into fruits and candies. Fruits include bananas, grapes, watermelons, plums and apples. Candies include various hard candies with different shapes and colours. A large pink lollipop is the Scatter, and is used to activate free spins.

Sweet Bonanza is slightly different in gameplay from the standard slot. The first difference you will notice is a larger playing field, and the lack of paylines. Instead, wins are granted from –any- position, so long as there are eight or more identical symbols present.

Gamblers will have a choice to pick between a 20x or 25x bet multiplier. The 20x bet allows you to purchase a free spins round for the price of 100x your total stake. Enabling the 25x bet multiplier disables the ability to buy free spins outright, but doubles the chances of them landing naturally.

After each win, all symbols that were part of that winning combination disappear. Remaining icons will fall to the bottom, while empty positions are replaced with new symbols landing from above. Tumbling continues until no more wins can be granted.

A multi-coloured bomb landing anywhere can reward a multiplier between 2x to 100x. All multipliers are added together at the end of each tumble, and then applied to any wins. These can only appear while free spins are being played.

Sweet Bonanza has a medium-high volatility, and an RTP of 96.52%. The largest win this sweet slot can give you is worth 21,100x your total bet.