Pragmatic Play, a games brand that’s multi-award winning, has ventured into the realms of unknown inside the reels of their new online slot machine. This latest addition is called Aztec Gems, and promises to bring a mystical and adventuring environment in which gamers can immerse themselves.

What makes this title so unusual is that it takes on a classic appearance, with the brand choosing to use retro inspired graphics and a more compact interface design. As such, we experience a medium volatility grid of 3×3, with an extra reel provided for multiplying wins, a feature which we will draw upon later. Consisting of five winlines, this is a matrix of jewels that can win you lots of treasures, provided you’re willing to scale the jungle in order to obtain them.

To keep all elements of the gameplay streamlined and simple, the paytable has but eight symbols, with seven of them nothing more than twinkling gems that deliver varying amounts of money. However, alongside these trinkets is also the golden headed wild, an icon that can prove most profitable should it land on the right reels of the matrix. In regards to the value of the icons, they only ramp up their worth if you apply the maximum bet per winline, otherwise the rewards are much less in worth. 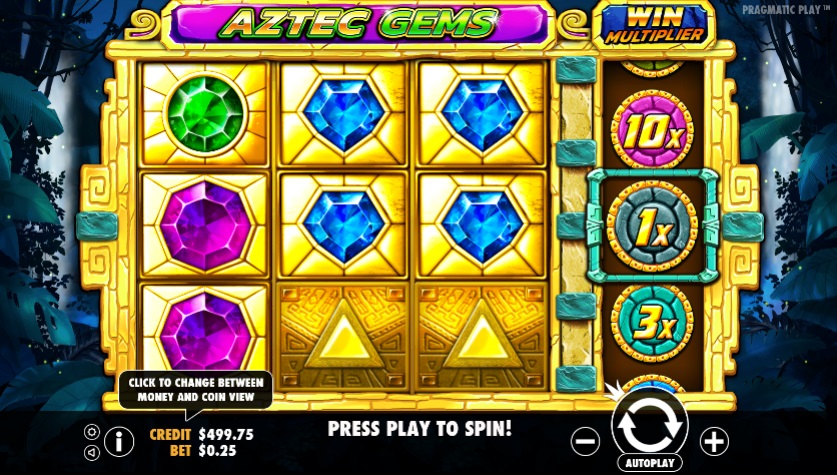 Moving onto to the fourth reel, the signature feature of Pragmatic Play, this is a unique multiplying column in which a random symbol will be chosen from those on offer. This symbol is selected at the end of every spin made, with the remaining icons found elsewhere on the grid receiving the same multiplying treatment as the one selected. Another simple dynamic of the title and yet it helps to make this classic feeling game so much bigger in its range and scope. Enhancing all of this is then the soundtrack, an intense mix of music which becomes more considerable in tempo the more you win.

To celebrate the release of this one armed bandit, the Chief Commercial Officer at Pragmatic Play, Melissa Summerfield, was asked to give a few words about the game and its appeal:

Aztec Gems marries intuitive gameplay with audio-visual excellence, and is a great addition to our slot catalogue.

Following on from this, Summerfield remarked on its design, saying

It is a video slot designed with crossover appeal in mind, drawing in new slots fans with fast-paced, easy to understand pay lines, while providing plenty to keep long-time fans of our titles engaged.

As those of you who follow the brand’s progress will know already, this isn’t the first slot to come from them this month, with Aztec Gems following the recent launch of another historically related pokie, titled Ancient Egypt. Much like with Aztec Gems, this Egyptian installment relies on a stirring combination of accessible features and brightly decorated aesthetics. These two released are in-keeping with Pragmatic play’s intention to launch two pokies each month, with Joker’s Jewels one of the next to be coming to our desktop and mobiles.

Until then however, you can enjoy the staple titles of Pragmatic Play’s catalog at respected brands, such as LeoVegas and Betsson, as well as visiting the label’s website and enjoying freeplay versions of the activities.