Uniqueness is something many gamers value, especially when dealing with iGaming activities such as slot machines. The issue with such a popular form of entertainment is that the themes can become stagnant, overdone even, a problem we know all too well when playing Egyptian themed titles. Fortunately, Pragmatic Play comes to our aid with their new game, Ancient Egypt, to try and introduce some freshness into the genre.

As the latest high quality activity to be created by the multi-award winning company, much hope surrounds the matrix of this online game; will the 3×5 format be another stellar example of what the brand can do, thus broadening their portfolio? Or will this game fade into the background? Going off of what we’ve seen of the highly decorated grid, the former seems to be more true.

Much like with any Egyptian themed game, the iconography is familiar to us, with the likes of Cleopatra, pyramids, and Anubis showing up across the 10 fixed winlines. However, it’s the boldest of their graphics, accompanied by a 3D interface, that really is cause for celebration – the game is brought to life. The symbols we’ve just mentioned, along with several card value ones, bring varied returns when part of a combination, with the top payout coming from Cleopatra herself. When five of a kind is scored, when using the maximum bet, players can bank as much as 5,000 credits. 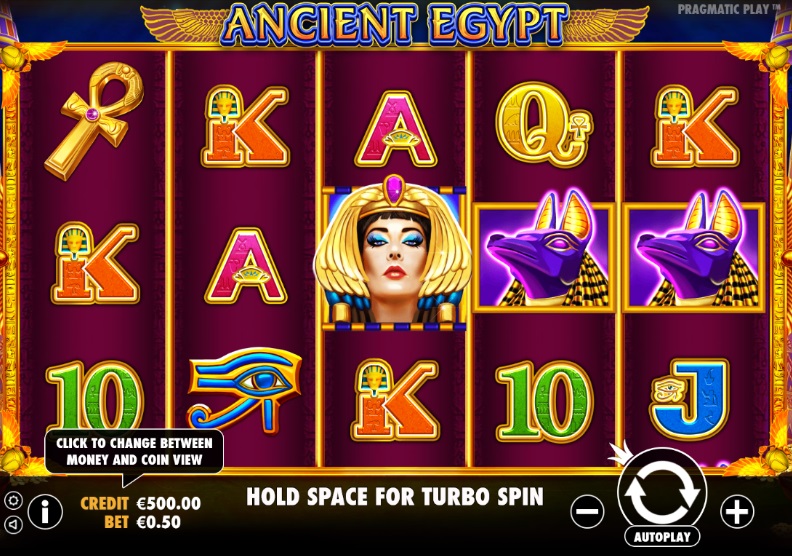 Of course, while the money is good, the special features of this title are what make Ancient Egypt a fine addition to the 80 plus titles that Pragmatic Play has already released. The scarab beetle is how to begin the bonus round, with three options available to you once there. However, you won’t know what you’re picking until you select a chest and unlock it, with the rewards being high or low payouts, or a round of free spins. Should you activate the latter, 10 games will be gifted to you, with the chance for more spins to be won during those rounds.

Keen to discuss the direction that this title has gone in, Melissa Summerfield, the Chief Commercial Officer at Pragmatic Play, had this to say about the matter:

Ancient Egypt is a refreshing take on a popular theme, bolstering our reputation as one of the most adept casino game providers in iGaming.

Moving on from the looks of the game, Summerfield then continued by passing comments about the paytable.

In an intuitive design twist, the game features nine paying symbols rather than the traditional 12 or 14, with exceptional underlying maths making it an inviting treat for new players and long-time slots fans alike.

This news of Ancient Egypt being launched, further cements Pragmatic Play’s devotion to launching two slot machines every single month, with Lucky New Year having been released already. As such, the brand will keep on being seen as a leading provider for credited casinos, such as Betsson and LeoVegas. Perhaps we should continue to watch this space, to see what other delights Pragmatic Play will bring into our homes…?