Fan or no fan, there’s little chance you’re unfamiliar with the cult Sci-Fi TV series starring David Duchovny and Gillian Anderson as special agents Mulder and Scully. The first being a believer in aliens and paranormal and the other a scientist and a skeptic, they were perfectly matched to investigate the potential existence of extraterrestrial life. Drawing inspiration from this hit series, Playtech has produced a 5-reel and 20-payline video slot featuring its two main characters and Multiplier Wilds pointing the way towards hidden treasures. “The truth is out there”, claims the tagline, let’s see if it’s also the case with high winnings.

What Exactly is Out There?

Spooky backdrop featuring woods at night gives the game a slightly sinister feel. The brave ones will have to invest between €0.20 and €500 per round to join Scully and Mulder as they investigate aliens and paranormal phenomena. They are your highest paying game symbols, with lower value ones represented by an alien hand, a torch, and a silhouette of the two FBI agents, along with Jack to Ace playing card icons completely unrelated to the theme. Autoplay button will get the reels spinning automatically up to 100 times, and Turbo play speed up the action in case you feel the investigation progresses at too slow a pace. 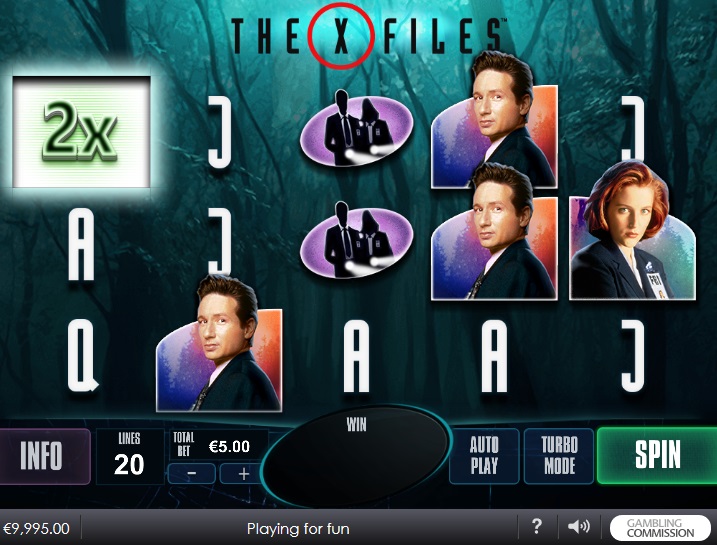 So-called Rifts may land on reels to reveal a Multiplier Wild substituting for all except for Scatters and boosting the reward by x2, x3 or x5. Get more than one to participate in a winning combination and the prize will be multiplied by as much as x25. Rifts can appear on more reels than one and all three positions of a single reel simultaneously, potentially delivering some pretty decent payouts.

Landing 3, 4 or 5 Scattered I Want To Believe flying saucers will win you 7, 10 or 20 free rounds respectively. The Locking Rift Free Games freeze Rifts in place while Multiplier Wild symbol spins inside the Rift with each spin of the reels. You could theoretically win up to 1,000x your stake during every single free spin, and in combination with 20 rounds financed by the house, it’s certainly not to be frowned upon.

Is This a Mystery Worth Investigating?

Unlike the complexity of the popular TV series, conspiracy theories and all, Playtech’s X-Flies is a pretty simple affair. It largely banks on special Wilds and their contribution to free games round, and though having the potential to deliver more than decent rewards, it feels as if the developer didn’t exploit the theme for all it’s worth. Players likely to enjoy this new title the most are fans of the series and high-rollers looking for high-stake games.