If you look up the word “epic” in the dictionary, you’ll find that it’s used to describe something which is grand and impressive. Playtech’s new release might not be extraordinary in terms of the theme, but does come with one or two very special ingredients. This 6-reel and 4,096 ways-to-win video slot is well capable of delivering epic winnings thanks to unlimited free spins and Wild Multipliers willing to boost the rewards by up to x5.

Go Wild with the Epic Ape 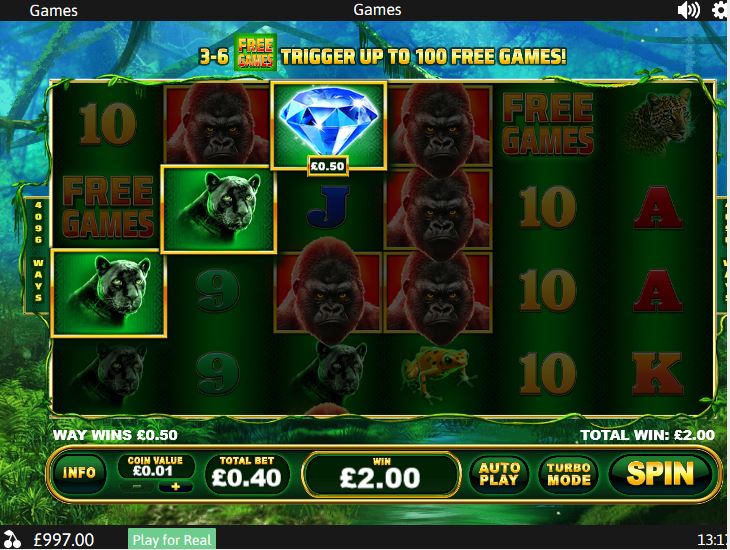 While visually Epic Ape is nothing to write home about, the audio background alone does a great job of setting the tone. It will make you feel as if walking through a jungle seemingly alone, but at the same time vaguely aware of dozens of eyes following your every move before their owners decide to bounce. When they do, expect to see benign little creatures such as frogs and chameleons, their large and dangerous neighbours panthers and leopards, and one very angry-looking ape. All of them represent higher-value game icons paying when 2x identical ones land on adjacent reels from left to right, no matter which position on the reel they occupy. The Ape tries to justify its name by landing stacked on all 6 reels and delivering the highest rewards. Wild Diamond does not pay on its own but will stand in for any of the other symbols, with the exception of Free Spins icon. While you’re spinning on the house, it will randomly multiply wins by x2, x3 and x5.

The jungle comes alive once you decide how much to bet and hit the Spin button. Coin value ranges from £0.01 to £2, which means a round will cost you a minimum of £0.40 and a maximum of £80. Turbo Mode speeds things up, and standard Autoplay feature allows you to sit back and enjoy the game while reels spin up to 99 times on their own.

Keep your fingers crossed that the bonus round gets activated by as many triggering symbols as possible, because that’s when the real fun starts and big wins become accessible. Landing 3, 4, 5 or 6 Free Games Scatters awards a minimum of 8 and up to 100 Free Spins, with Wild icons multiplying prizes by up to x5. All that is very generous, but does it deserve the to be called epic? Playtech thought it didn’t and decided to make the feature re-triggerable by as few as 2 Scatters, over and over again, with no limits whatsoever. That’s right, you could theoretically keep spinning for free until infinity!

Epic Ape is a high variance game with an RTP of 95.96%, and since its highest-value icon pays a maximum of 500 coins for 6-of-a-kind, it’s clear that epic wins are only attainable with the help of free games bonus round and the attached multipliers.