Play’n Go have announced the release of their newest 5-reel slot Mermaid’s Diamond, inviting players to take a plunge and collect underwater treasures.

Mermaid’s Diamond is a 5-reel slot with 720 ways to win, featuring aquatic-themed visuals and dramatic musical background. The irregular reel area consists of 5 columns and 3 to 5 rows populated by colourful gems and various underwater creatures, along with the elusive Wild Mermaid which will occupy single position but also appear stacked.

A mystical force randomly adds Wild symbols to 1 or 2 reels to help you form winning combinations, while Scattered Treasure Chests launch Free Spins round with the potential to pay 5,000x the bet. The number of spins will be revealed by clicking on one of the five triggering Chests, though having received the initial quantity of up to 25, landing 3 or more Scatter icons will extend the feature and award up to 5 more spins. Theoretically, one could go on spinning on the house infinitely! While rounds are being played for free, all appearing Diamonds will be collected and each 5 will make one reel go completely Wild. Playing with more than one Wild reel simultaneously is clearly the key to harvesting the full potential of this dive.

One might fear landing 5 Scatters would be next to impossible, but that’s why the developer has included Divine Intervention which might take place on a non-winning spin and add the elusive 5th Scatter to 4 already nesting on the reels, thus activating the bonus round.

New Play’n GO slot features relatively high RTP of 96.5% and can be played for as little as 20 cents and as much as €100 per spin, a range wide enough to make the game accessible and appealing to both low and high-rollers. 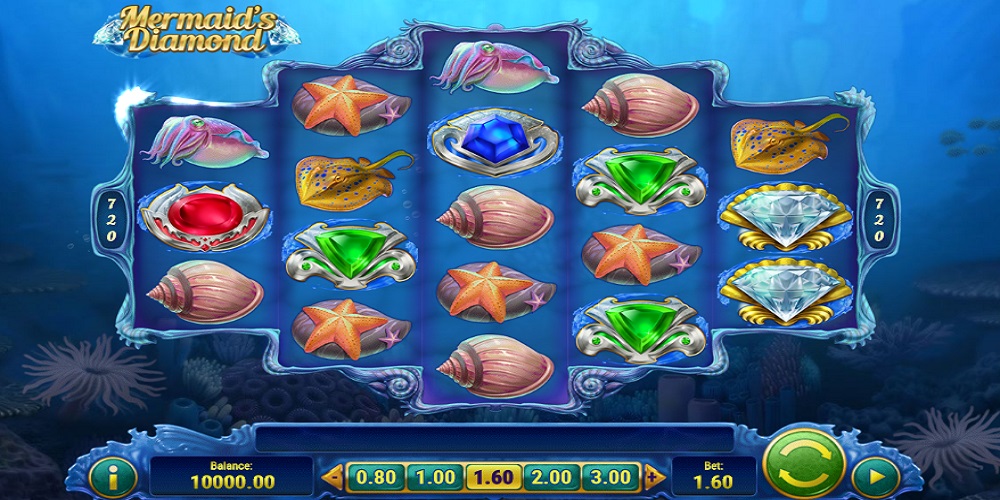 The latest addition to Play’n GO portfolio comes close after the successful launch of Viking Runecraft which has been nominated for the 2017 EGR Game of the Year award. This innovative grid slot with a Viking theme has been a huge hit since its April release, featuring amazing graphics and a variety of unique features. Mr. Törnqvist says:

Our slots set themselves apart in their ability to transport players into the game world. I expect this latest addition to continue our fantastic success in recent years, benefitting operators and players alike.

We’ve yet to see if Mermaid’s Diamond receives the same warm welcome from the gaming community as its predecessors, but there’s no doubt new Play’n GO launch is well worth a try.