Space is calling for all wannabe explorers, as omni-channel brand Play’n Go have launched into the unknown recesses of space with their new slot machine, called Reactoonz. Although the title keeps the theme of the game hush hush by not giving too much away, this is a video slot that’s based in space, giving us a galaxy in which to explore.

As fans of the label might already be aware, this personalised 7×7 matrix is actually a follow on to Energoonz, a popular one armed bandit that grew in popularity due, in large, to its colourful aesthetic and adorable alien characters. In a similar fashion to the first title, Reactoonz will see those same aliens return, with their big eyes and quirky features tumbling down the cascading reels.

The aim of the game is simple: players need to connect matching aliens together, to form a cluster that can then be turned into special features later on. Whenever these creatures form a winning combination, they’ll teleport off the grid in order to feed the ever hungry Gargantoon, a specimen that is eager to reward you with a chain reaction of features and wild symbols. In addition to this, the quantum leaping of these aliens can also unlock four more outcomes by collecting these aliens, with each one delivering something uniquely different to the last. 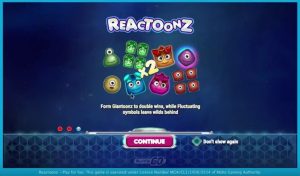 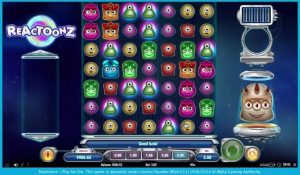 Seeing as how Reactoonz has been created as a HTML title, in-keeping with Play’n Go’s functional omni-channel platform and its appeal, users will be able to switch their ‘mode of transportation’ at any time. If you wish to play on your mobile, you can do so, and then quickly teleport back to your desktop without losing a single alien. No matter which device is your preferred choice, you’ll receive the same high quality experience across the board, giving you a greater sense of convenience and adaptability when playing.

In celebration of this new exploratory slot, we asked the CEO of Play’n Go, Johan Törnqvist, to give his thoughts on this new release: “We’ll once again be taking players on an immensely enjoyable journey into deep space to visit the Reactoonz.” He continued by referring to the first title, Energoonz, and the appeal it had with players. “Energoonz proved a smash-hit with players and operators alike after its launch, and we’ve built on the proven formula with out-of-this-world visuals and new features unique to our latest gridslot.”

Although Reactoonz is the newest game that Play’n Go have launched, it isn’t the first to use their market leading gridslot technology, there have, in fact, been others. These include titles such as Viking Runecraft, a game that nominated for the EGR Game of the Year, and GEMIX, retro detailed slot with a modern day twist. Should these, or any of their other titles, interest you, you can play demo versions live from the Play’n Go website. When visiting their site, you’ll note that Reactoonz is the first listed on their Games subsection.