Though one can hardly consider Egyptian-themed titles a rarity, there’s always a place for a new slot celebrating magic and mystery commonly associated with ancient Egypt. That is, providing the game brings something new and different, along with (preferably) high win potential. Legacy of Egypt slot by Play’n GO has hit the market on 25th April and now it’s up to players to judge whether it’s a welcome addition or more of the same the online gaming community could have done without.

Recreate the Mystery of Ancient Egypt

During more than 3,000 years, pharaohs ruled Egypt as political and religious leaders. As the Lord of the Two Lands, pharaoh was the owner of all land, creator of the laws, taxes collector, and defender of their people. As High Priest of Every Temple, they built temples and performed rituals to honour gods. Pretty much as soon as they would claim the throne, they’d launch the building of his or her tomb. Burial was an important ritual and preservation of the body deemed to be crucial for the survival of one’s soul in the afterlife.

Play’n GO has attempted to bring a bit of this mysticism into our everyday lives deprived of magic. They’ve done a pretty impressive job when it comes to design, additionally supplying a fantastic soundtrack bound to take you way back into the past. The company’s CEO, Johan Törnqvist, says:

This latest release is another exciting addition to our line-up and we can’t wait to see what players make of it.

He further voices his assurance that

they’ll be really engaged by the fantastic graphics and immersive soundscape in which the game is set.

Legacy of Egypt plays with 5 reels and 30 paylines, offering one to stake a minimum of €0.30 and a maximum of €90 per spin. All game symbols pay as of three-of-a-kind, with powerful leaders (possibly Tutankhamun and Cleopatra) being the highest-paying icons. Each winning combination launches nice little animations which bring symbols to life. 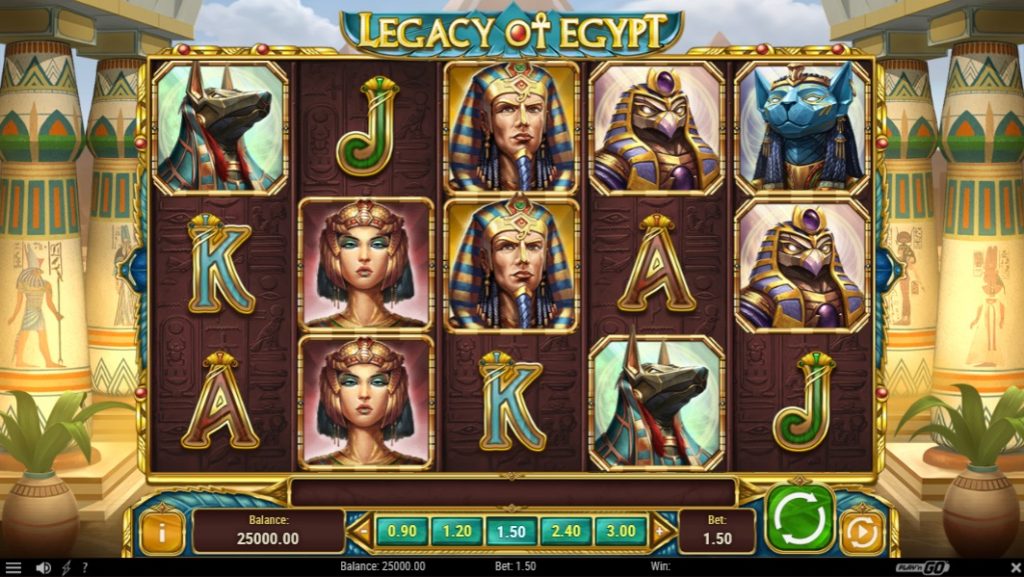 Stacked high-value icons and generous appearance of Wild ones tend to produce decent enough wins to keep you afloat while waiting for the bonus round to activate. Wild Scarab subs for all other icons with the exception of Scattered Pyramids which in turn trigger free games. Wheel of Gods will spin to award up to 20 rounds on the house, with Scatters acting Wild and all respective payouts boosted. Rewards are subject to randomly awarded multipliers of x2, x3, x5, x8, or x10. Land two Wild Scatters while spinning for free and they’ll activate Pyramid Spins. Once again Wheel of Gods is used to offer 3, 4, 5, 6, 7 or 8 spins with boosted rewards. Three or more Wild Scatters triggering or retriggering Pyramid Spins double all values displayed on the Wheel.

Worth Giving a Go?

Legacy of Egypt is a medium variance slot featuring an RTP of 96.5% and offering to pay as much as 5,000x your bet. Frequently exploited theme might make you want to give the game a miss, but try to resist the temptation; its bonus round makes it well worth a few spins. Highly potent free games round could prove to be quite exciting and potentially deliver more than decent payouts.