Who doesn’t love quirky games with a hint of playfulness thrown in for good measure? This month we’ve seen Thunderkick release another brand new slot, this time in the form of Pink Elephants. As the name suggests, this is a pink themed pokie that’s set in a wild and colourful jungle, where unusual creatures live.

This delightful setup has been brought to life in a 6 reels format, thus giving players a greater range of variance to interact with when playing. What is more, there’s 4,096 ways to play, making this a huge slot. Seeing as how the matrix has adopted a similar stature to the animals, this slot should keep users occupied for some time, with the various game features enhancing the experience. However, do watch out for the medium volatility of the grid, as it can prove a challenge.

In regards to features, users will find a basic paytable, as well as special symbols that trigger a collection of bonus rounds, with the main mini game involving collecting elephant orbs. These orbs can be found from the pink elephants themselves, who sometimes hold them when they appear. The end result is that you fill the Symbol Meter, thus generating a free spin, as well as changing the current symbol to that of an elephant. Some may argue that this is a simple feature for a new game, but it’s one that further livens up the matrix of this one armed bandit.

Due to the, potentially, basic structure of the bonus game, Thunderkick has seen fit to add another special feature, this time in the traditional form of a scatter symbol. When three or more of these are grouped together consecutively, a series of free spins will be activated, with a further two scatters leading to a respin of the reels. Players will also find that a wild symbol also makes an appearance, with it able to substitute all other icons except for the scatter. And so customers will find a mix of contemporary and old school techniques housed inside this game. 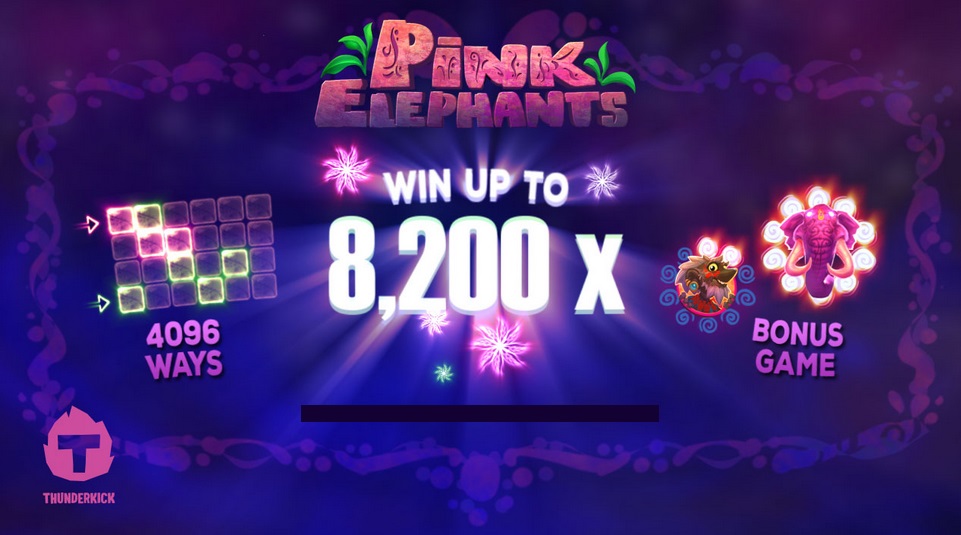 Pink Elephants isn’t the only new release that Thunderkick has launched in recent months, with this video slot joining the new titles of Flame Busters, Barber Shop Uncut, and Full Moon Romance. Each of these games showcases the high quality 3D animations we’ve come to expect from the brand, while also adopting a diverse take on themes and genres. Given that Pink Elephants has already proven popular so early on, offering considerable wins, we’re looking forward to seeing what else Thunderkick might release before the year is through.

If you wish to play this animalistic title, there’s a few sites that offer a play for free version, otherwise you can always visit one of the many Thunderkick casinos currently online. Offering a jackpot of £1,000, for a minimum bet of just 10p, there’s much to gain and little to lose when playing with the wonderfully adorable and perfectly rosy Pink Elephants.