The legend of Hamelin is brought to life in this new slot machine from Quickspin, titled Pied Piper. For those of you that don’t know the tale, it’s about a man with a magical pipe, which he uses to lure away rats and mice; upon doing this for the town of Hamelin, the residents refuse to pay for his services, and so he lures away their children in response. Although it may not be the most pleasant of stories, Quickspin have managed to make this a whimsical legend you want to be a part of.

Epic cuteness of the furry critters, alongside the bright attire of the Pied Piper make for a visually stunning slot machine, sporting 5 reels and 40 winlines. The intricate details help shape our response to the tale, but it’s the features that Quickspin have included that really bring the events to life. This chiefly comes in the form of the Piper Respins, though there’s a couple more extras that this maverick wants to show you. 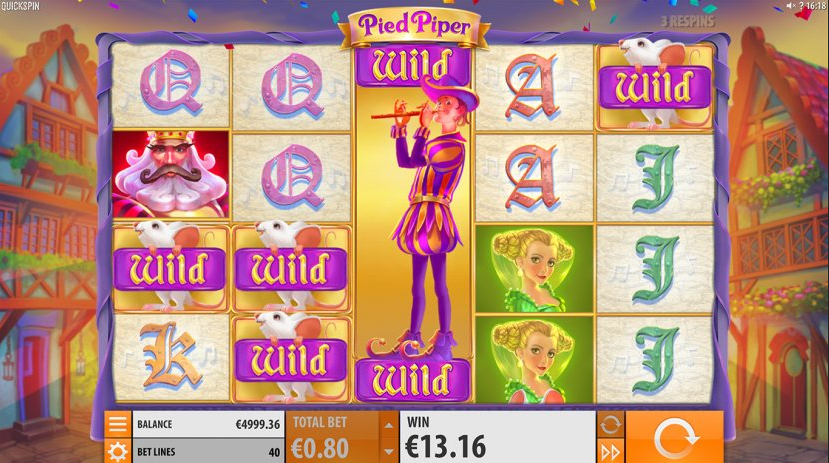 After you’ve given your coinage to pay for passage onto the game, you’ll work your way through combinations of symbols, with groupings of three, four or five bringing the wins. The king is, of course, the most valuable of icons, gifting users 10x what they wager. However, for the most interactive of experiences, you need to land a Piper Wild on a single reel, which he will then fill. Once this happens, the Piper Respins will be triggered, with the Pied Piper leading any of the Mouse Wilds away by the sound of his pipe. All the mice in view will move one reel to the left when this happens, and will continue to do so if the feature is activated again.

If you’re eager to trigger this feature, you need to be mindful that this stacked symbol can only land on the third, fourth and fifth reels of the grid, thus presenting a medium volatility title overall. This is in stark contrast to the other bonus round, the Free Spins, as the bonus tiles can land anywhere to trigger a round of 10 free games. When these rounds are started, all players are promised at least one Mouse Wild on the reels, with a maximum of six available.

Ready for release on January 9th, this is another new fairy tale slot to grace the Quickspin portfolio; it was only in late December that Rapunzel’s Tower was launched. Both that and the Pied Piper utilise vivid graphics and a unique cartoon animation to attract customers, as well as weaving a new retelling of stories we know so well. Alongside tales of old, there’s also new ones to be told, such as Northern Sky, which is new pokie that will be released by Quickspin in the near future.

Upon release, the Pied Piper will be available to play via trusted Quickspin casinos, however you’ll only be able to obtain an overview of the title when visiting the Quickspin website, which is customary for all their games. No matter which casino you choose to start you down the path of musical adventures, we hope that the Pied Piper is able to match the successes of previous titles from the label.