Experience the Northern Sky with Quickspin

One of the many attractions we all want to tick off of our bucket list is to see the Northern Lights. These gorgeous naturally occuring ‘dancing lights’ are such a spectacle that people from all over the world travel thousands of miles every year just to see them. Some holidaymakers are successful, while others go at inopportune times and sadly miss out.

If the lights are something you’ve always wanted to see, or merely been fascinated with, then you may want to ready yourself for Quickspin’s new slot machine called Northern Sky. As the name so aptly suggests, this is about the phenomenon that can be seen from Iceland and Greenland. Although the magical aurora won’t be the real deal, you’ll get a comforting array of cash prizes to console yourselves with, not forgetting an easy to adapt to game. All in all, it’s not a bad pay off for missing out on the real thing. 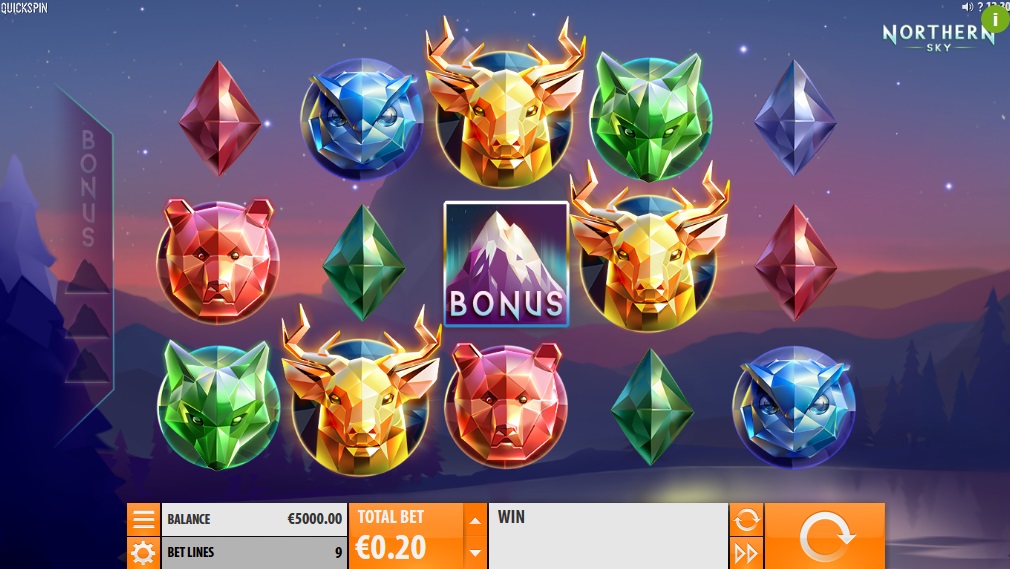 The size of the slot is standard, offering customers a 3×5 matrix, consisting of a range of high and low value tiles, with some of the higher scoring ones activating special features. As there’s only nine winlines in all, you’ll find that the cost of playing such a compact one armed bandit is a lot more affordable than most. That being said, until the game is actually released, exact betting thresholds are difficult to come by. Not that this information should put you off, seeing as how Quickspin usually caters to bother budget and highroller gamers alike.

As for the bonus features, they come from two different characteristics: the respins and the free games. Despite sounding a little on the bland side, these two extras can ensure you get a hefty win at the end of your playthrough. Out of the two, it’s more likely that the respins will be triggered, as they occur after every winning combination, which as we all know is between three and five of the same symbol. When the respins start, the winning combination will remain in place, while the other tiles move about in a bid to score you more victories. If you keep creating wins, the feature will carry on, but if you should fail to do so, normal gameplay will resume.

Moving onto the bonus spins now, we find that these are more tricky to come by as three or more of the bonus icon are needed to obtain it. However, once this hurdle is out of the way, all players will be awarded 10 games on the house, with only the animal symbols of the paytable (the most rewarding) being available during these rounds. To help you keep track of how close you are to triggering this bonus, there’s a bonus meter which fills up as you work those reels.

If you’re desperate to get started, there’s a slight wait on this game, with its official release not until February 13th, just before Valentine’s Day. However, should you want to sample a few Quickspin titles before then, to test the waters so to speak, there’s an extensive catalog of theirs available on both their website and from casinos that support their software.