Opera fans will be pleased to know that NetEnt is about to release their latest product called The Phantom’s Curse video slot, which will be a part of their new Universal Monsters™ series. The slot will be set in a classic theatre ambience, featuring five reels, four rows and 40 fixed paylines, playable from £0.20 per spin. Mobile gamers will be pleased to know that the 2018 release will be playable across all devices, so everybody will have the pleasure to enjoy the sweet sounds of opera as they watch how the disfigured Phantom falls for the beautiful soprano Christine. 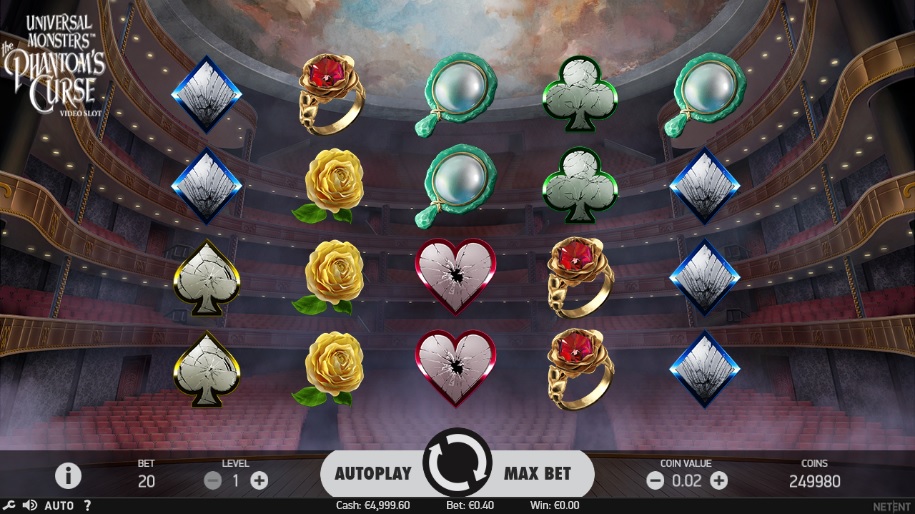 The Phantom’s Curse is packed with action

The Phantom’s Curse will offer three rewarding features: Masked Phantom Re-spin, Free Spins and Pick and Click. Try to land stacked Christine and stacked Phantom on the reels to trigger the Pick and Click feature, which consists of two stages. In the first stage punters get to pick one of eight roses which all hide different cash prizes, while in the second stage spinners choose one of three mirrors that reveal multipliers, which are then combined with cash prizes from the first stage.

Trigger Masked Phantom Re-spin by landing stacked Masked symbol and the stacked Phan tom symbol, which will then turn into sticky Wilds that remain on the reels for the following free re-spin. Chandelier Scatters, which can be landed on reels 1, 3 and 5, are crucial for the Free Spins feature. Gamers will get unlimited freebies and the feature will end once the Phantom cuts off all the ropes from the chandelier. The Phantom will perform one cut every time he appears on the reels as a Wild. Plenty of stacked Wilds can be expected during the feature, so plenty of rewarding payouts can be won.

If our sources are correct, the maximum possible payout that can be expected in the NetEnt product is set at 800 times the triggering bet in a single spin. Gamers, do prepare your best Opera outfits and be sure to bring your Opera glasses, so that you will be able to catch all the necessary details in order to win big.