NetEnt Announces the Release of Hotline

NetEnt’s new video slot, scheduled for launch on 22nd March and described as “fast and furious action on the reels”, draws inspiration from Miami Vice, 1980’s American crime TV series featuring two undercover detectives fighting organised crime on the streets of Miami. Sonny’s and Rico’s lookalikes, along with the team’s sports car, feature equally prominently in this 5-reel and 30-payline affair boasting a completely new and unique feature called Hotline – hence the name of the game. Make the best use of expanding Wilds, re-spins and a free spins bonus round, and you could be cruising out of Miami with as much as 60,000 coins. 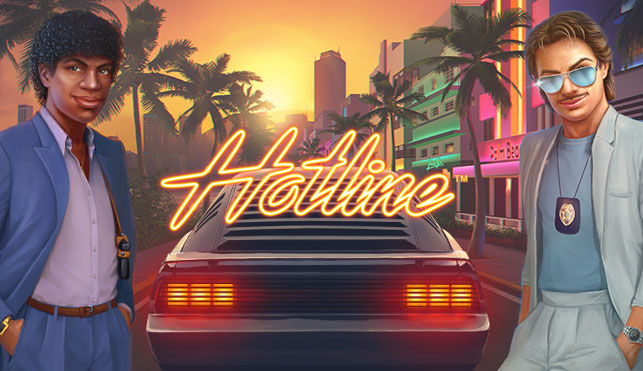 Don Johnson aka Sonny and Philip Michael Thomas aka Rico turn into Baretta and Shades, two heroes tasked with catching a female villain. Names have changed but everything else mirrors the original series and is in tune with the era; Baretta wears recognisable Italian sports coat over a T-shirt, the thieving lady lugs around what looks like one of the first mobile phones to hit the market, and famous white Testarossa becomes a red sports car, capable of transforming into an Expanding Wild which sticks around for a re-spin. If you’re lucky enough, multiple Wild reels could be spinning in your favour and deliver hefty wins even before you’ve managed to activate the bonus round.

New and innovative feature called Hotline allows you to make one, two or all three rows hot and thus increase the possibility of landing more expanding Wilds, followed by re-spins and potentially additional Wild icons. There’s no such thing as a free meal and making a row hot comes at a price. The more Hotlines you choose, the more you’ll have to invest into each spin, but it might be well worth it.

Sunset in Miami is your Scatter icon. It will only appear on reels 1, 3 and 5, and landing it on all three simultaneously wins you 7 Free Spins. Hotlines can also be chosen while you’re spinning on the house, and all Wild cars will keep speeding over their respective reels for the remainder of the bonus round.

Easily recognisable setting, familiar characters and retro soundtrack instantly brings to mind Miami Vice and the unique fashion style promoted and made famous across the US by its lead actors. Fans of the series will doubtlessly enjoy this little trip down the memory lane, but even if you’re not one of them, you’ll love NetEnt’s Hotline for its unique features and high win potential. The fact that variance of the game can be adapted to fit different preferences is likely to attract a wide range of players.