Obviously choosing a perfect timing, Microgaming launches branded Halloween Slot just in time for All Hallows’ Eve 2017. Whether you’ll be given tricks or treats, there’ll be shivers down your spine and thrills after every spin – guaranteed!

The news about Microgaming signing a licensing agreement through Compass International Pictures broke in July, and now we have a video slot based on the cult slasher movie from 1978 hitting all the biggest online casinos. Directed by John Carpenter who also scored the film, Halloween bases its story on Michael Myers, who 15 years after murdering his sister on Halloween night in 1963 brakes free from a mental institution, returns to Haddonfield, Illinois, and continues where he left of – killing people. The movie starred Donald Pleasence, with Jamie Lee Curtis having her film debut in this independent, now classic, horror. As it can be expected, the video slot launched by Microgaming, follows all the right formulas to scare you into winning considerable prizes!

The game features 50 paying lines, with the reels set against a backdrop of Michael’s deserted, decaying house. Through excellent design and clever execution, the designers made Mike Myers appear lurking in the window or hiding behind the clothesline, somehow haunting the game as he did haunt the Haddonfield townspeople in the movie. The grim soundtrack bits are also included, for a full-terror experience we are sure fans of the movie won’t mind at all. 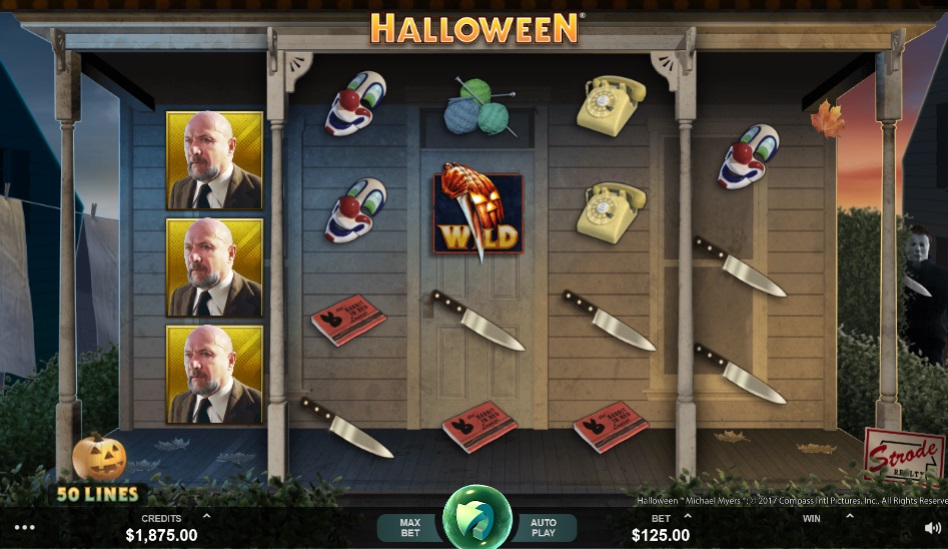 The fresh-from-the-oven Halloween slot game is packed with amazing features. Let’s start with mentioning Wandering Reels, a Microgaming invention through and through, which are in fact a group of three reels that spin together. The Wandering Reels feature comes boosted with Jumbo Block, so naturally there is potential for big wins with this one. The remaining bonuses include Trick or Treat Wheel Bonus, Boogeyman Bonus and a Free Spins round. All in all, the gameplay offers cash prizes, a pick-me bonus, some serious action involving all the familiar characters from the movie, free spins and multipliers.

People at Microgaming admitted being big fans of the cult Halloween movie, and added that this game is a ‘celebration of the classic horror film’. Through a ‘feature-rich game engine’ and ‘superb design and storytelling’ players are in for good scares and huge wins playing Halloween slot this Halloween season!