Always a company that keeps fans of their slot games happy and contented, Microgaming have just announced that in March of 2014 they will be adding another slot game to their Untamed Series of slots and this fourth game in the series will be called the Untamed Crown Eagle.

Microgaming’s range of Untamed slots include the Untamed Giant Panda, the Untamed Wolf Pack and the Untamed Bengal Tiger slots, and they did break new ground for all of these slots boasted a range of playing features that had never been seen before on an online range of slots.

This new Untamed Crown Eagle slot game offers players the now standard 243 ways to win playing structure which requires just one set of 30 coins to be wagered to allow that player to have all of the payline permutations visible on the slot games screen covered, and this does of course mean a huge number of winning opportunities are put into live play on each spin of this slots five video reels!

Collect a Wild – There is a Wild symbol on all five reels of this Untamed Crown Eagle slot game, and as well as standing in for the standard reel symbols but not the bonus scatter symbols, whenever you have had one of them spinning into view that symbol will, after it has helped complete any winning combinations, drop down into a small grid at the foot of the reel it spun in on.

There are four boxes in each grid underneath each reel and as soon as you have accumulated and spun in four of the Wild symbols on any single reel, then for the next few games that entire reel will become a completely Wild Reel with all of the positions on it being filled with Wild symbols.

Lucky Nudge – The Scatter symbols of which you need to get three of them spinning into view anywhere on the screen are the trigger symbols for the free spins bonus game round on this Untamed Crown Eagle slot, however should you spin in two of them anywhere in view, and get one of them one reel position out of view, then a Lucky Nudge feature may kick in.

What this Lucky Nudge bonus feature will do is to automatically nudge that out of view Scatter symbol upwards or downwards so that it becomes in view and will then trigger the free spins bonus game feature round.

Free Spins – As mentioned above you can and will trigger a set of free spins whenever at least three of the Scatter symbols are in view on the Untamed Crown Eagle slot base game screen, this symbol is oversized and represent a large Eye Ball!

Whichever reel symbol the Soaring Wild symbols attaches itself to become both a Wild symbol and any winning combination it helps to form will be boosted by the multiplier value shown on it.

Your Gamble Option – The Your Gamble option is an optional gamble game feature round which is found exclusively on Microgaming’s Untamed Series of slots, and should you be prepared to gamble the value of any winning combination spun into view then you simply have to click on the Gamble button.

This will then load onto the slot screen a large globe type animation and you are tasked with choosing the risk element and winning odds attached to this gamble game. You will find a plus and minus button on the screen and by adjusting either of them you will make more or less of the Globe green or red in colour.

The green segment of this wheel is the winning zone, and once you have made as much or as little of the Globe green or red as you like you then spin an arrow and if it lands in the green zone you win, however should that arrow point and land in the red area you have lost.

The winning payout odds increase in value depending on how little of the globe you have coloured green, but be aware that there is an increased chance of the arrow stopping in the red, losing zone if you have opted to cover only a small area of the Globe green! 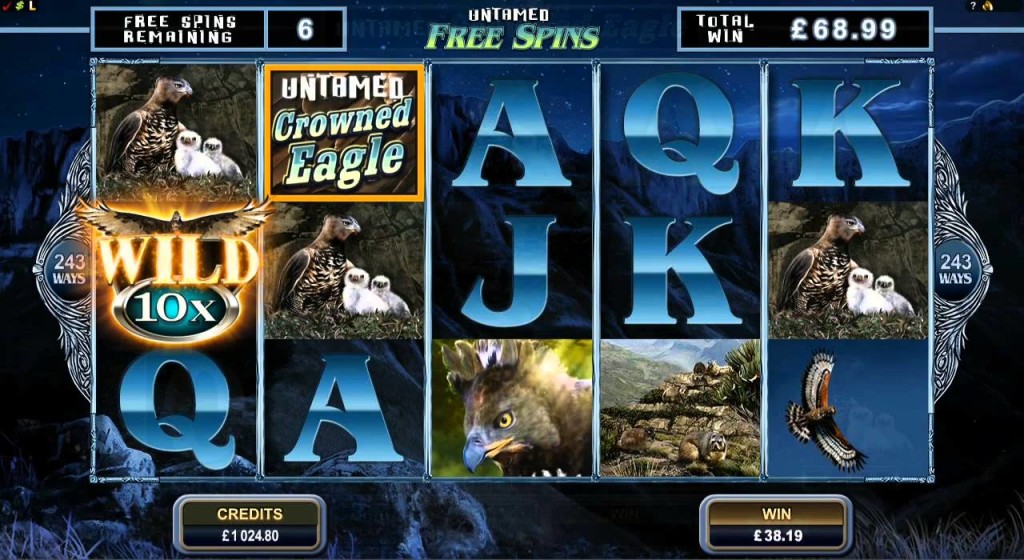 As 243 ways to win are always put into play when you are playing his Untamed Crown Eagle slot game then there is of course a price to be paid for playing that many ways to win, and as such you are obliged to stake a wager of at the very least 30 coins to set the reels into motion.