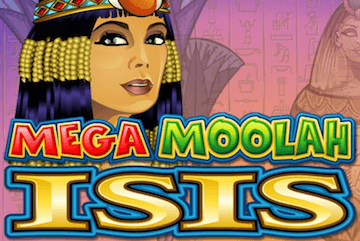 These jackpots vary in size and as they are randomly awarded, with the smaller valued progressive being won every few minutes, then you are more likely to walk away with one of these progressive jackpots when playing this slot as opposed to some of their other currently available progressive slot machines.

The Mega Moolah Isis is a revamped version of Microgaming’s original Isis slot, both of these games share an identical Egyptian theme and the base game on each of them comes with very high variance type of playing structure, so be warned when you play it you may go on a dry run of luck when you are playing it, however at any time some huge paying winning combinations or a very rewarding bonus game feature could be awarded.

There are four randomly awarded progressive jackpots to be won on the Mega Moolah Isis slot game from Microgaming, these are of course different sized jackpots with the lowest one being the Mini Jackpot, followed by the Minor Jackpot then the Major Jackpot and the one everyone will want to win is the Mega Jackpot.

There is a different seed value or reset value which each of these four progressive jackpots will reset too whenever one of them has been won and awarded, the Mini Jackpot is the most frequently won progressive jackpot on this Mega Moolah Isis slot game and this is won every few minutes and once won the jackpots resets to a value of 10.00.

The Minor Jackpot is the second most frequently won jackpot on this slot game and this particular jackpot has a reset seed value of 100.00, this jackpot is won every 15 minutes or so.

The Major Jackpot has a much larger seed value and this is 10,000.00 and this is won in weeks or months rather than every few minutes as thier lower valued jackpots are.

The Mega Jackpot can and does grown to massive values and when you win this jackpot you are guaranteed to become an instant millionaire as the reset seed value of this jackpot is 1,000,000.00, there can be some large time scales between this jackpot actually being won!

Should you decide to play this Mega Moolah Isis slot game then you are first going to have to choose just how many of its 25 optional paylines you put into play, you can pick as many or as few of them as you so desire, however never forget that you are never forced to play maximum lines to have a chance of winning the progressive jackpots attached to this game.

We should point out that whilst the random jackpots awarded on this Mega Moolah Isis can be won at the end of any paid for spin on the reels, you will first need to play a unique bonus game to find out just which progressive jackpot you have won.

Simply spin the wheel and it will spin then slow down, and whichever segment of the wheel is facing the Win Pointer at the end of the spin will be the progressive jackpot that you have won and been awarded, you are guaranteed to win one of the four progressive whenever the Mega Moolah bonus game is awarded.

There is of course a standard type of bonus game which can be triggered when you are playing the bade game of this Mega Moolah Isis slot machine, and this is a set of free spins which is awarded via the Scatter symbols.

There are a set of Eagle type symbols in play on each of the five video reels of this slot machine, and whenever you get two or more of them you are given a special payout which is a multiplier amount based on the total amount you wagered for that spin, 2, 3, 4 or 5 of them spinning in awards a multiplier payout worth x2, x4, x20 and x600 respectively.

However when three or more of these Eagle symbols spin in on any one single base game spin, then in addition to that staked amount multiplier you will win a set of free spins. The number of Scatters you have spun in determines just how many free spins you get to then play out.

Three, four or all five Eagle Scatter symbols awards you with a set of 20, 25 or 30 free spins respectively, remember that this slot game is a high variance one and as such the multiplier values in play during all of your free spins is a large x6 and some large winning payouts can be awarded when this bonus game is awarded to you. These free spins can re-trigger when they are playing out!

You can also opt to try and gable any winning combinations value and to do this once a winning combination has been spun in click on the Gamble button and then play a card game predicting game, where you are offered the chance of doubling or quadrupling the base game wins value by guessing the colour or the suit of the next card.