Just because the Year of the Dog has already begun doesn’t mean you can’t keep celebrating for months to come. One can do so by playing the new Chinese-themed video slot developed by Pragmatic Play, a colourful 5-reel and 25-payline affair with a variety of lucrative features. Middle reels will be taken over by colossal symbols during the unlimited free games bonus round, and re-occurring re-spins dish out hefty cash prizes along with one of the three jackpots.

What kind of a New Year’s celebration would it be without having colourful fireworks light up the night? You’ll see them exploding in the background of a brightly lit Chinese temple, home to a reel area populated by traditional New Year symbols. Paying combinations will be made with the help of lion masks, firecrackers, drums and fruits, along with lower-value playing card icons executed in line with the theme. Setting the coin value between $0.01 and $0.50 and betting 1 to 10 coins per round, one gets to spin the reels for as little as $0.25 and as much as $125.

Wild golden Dog subs for all except for Money icons and Scatters represented by piles of golden coins. Landing 3 of the latter awards 5 Free Spins during which the 3 middle reels morph to create one giant 3×3 symbol. Hit 3 more triggering icons and you’ll get 5 additional rounds on the house. The best part is there is no limit as to how many times this feature can be re-triggered, meaning one could theoretically keep playing for free infinitely. 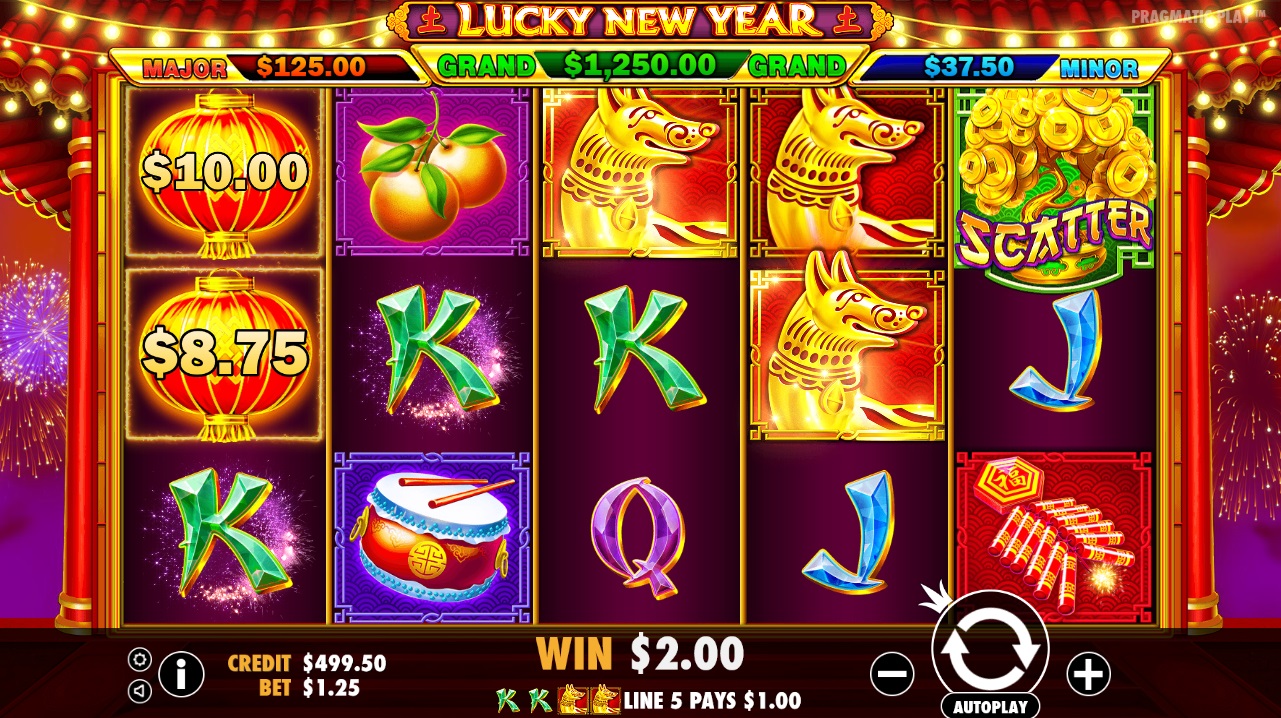 Money symbol, depicted as a red and gold Lantern (a symbol of luck and prosperity), appears on all 5 reels with a random value attached. Get 6 or more to land at the same time and you’ll activate the Respin Money feature. Once all wins have been paid out, regular symbols will fade away while bonus icons remain fixed. Standard reels are replaced by special reels consisting only of Money symbols and empty spaces, after which they’ll re-spin 3 times. Each new bonus icon sticks to its position and resets the number of re-spins to 3. The bonus round will end either once you’ve used all your free spins, or when you manage to fill all reel positions with the identical symbol. At this point, values attached to each of the Lantern icons will add up and handsomely contribute to your balance. Should the round end with these occupying all 15 positions, you’ll also win the Grand Jackpot.

Lucky New Year is a medium variance slot with an RTP of 96%. The mask is the highest-value regular symbol, willing to pay up to 20x your total stake or a maximum of $2,500. More significant amounts are likely to be delivered via Free Spins and re-spins, especially if you manage to hit one of the jackpots. Keep in mind that their value changes with the size of your bet. Go for minimum stakes and the most you’ll be able to collect is $250; spin the reels for a maximum $125 and winning the Grand Jackpot will boost your balance by as much as $125,000.