Enter the Arena with Lucha Legends Slot to Win up to 165,000 Coins 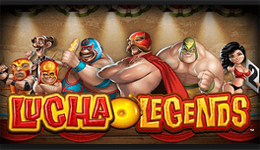 Lucha libre is a term used in Latin America for professional wrestling. It literally means “freestyle wrestling” and this style of wrestling has become popular worldwide for masks in vibrant colours that cover wrestlers’ faces and their acrobatic moves. Microgaming is yet another software developer that found a source of inspiration in Mexican wrestlers and their art of fighting. The company’s creative team has come up with Lucha Legends, a video slot that will provide players with an exciting gaming experience and multiple opportunities to win.

The Microgaming’s take on the theme uses a 5×3 layout with 25 fixed paylines. Gamblers can wager up to 15 coins per line at a coin denomination varying between $0.01 and $0.10. With a betting range spreading between $0.25 and $37.50 per spin and an RTP of 96.38%, this is a game suitable for both beginners and high rollers. The slot comes equipped with the Power Up Mode that will boost your winning chances by doubling your bet. We will discuss this feature later in the article. Players can activate the Quickspin feature to spin the reels faster and Autoplay to activate up to 100 automatic spins. 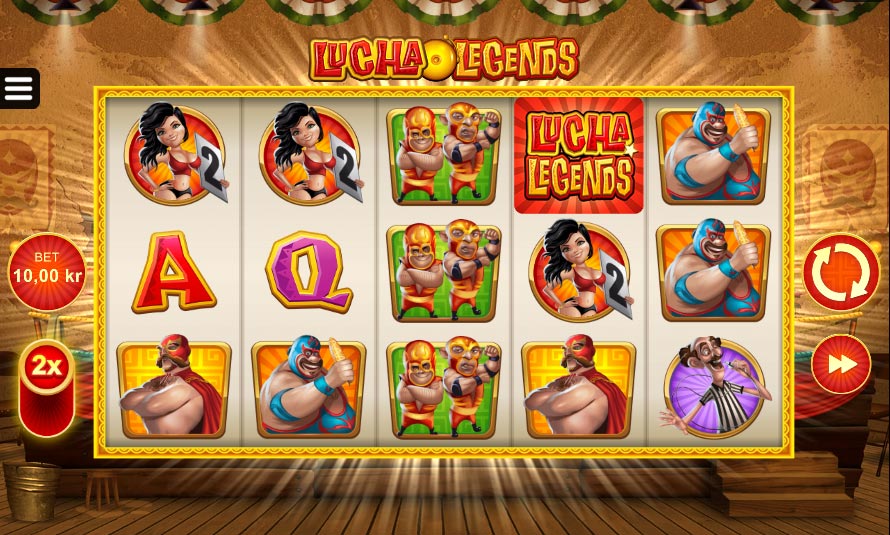 Visually, the slot looks great with cartoonish graphics in vibrant colours. Latin guitar music along with sounds of a cheering crowd adds to the overall atmosphere of the game. The plain white reels are set against a wrestling ring. They are home to wrestlers or luchadores Sal and Pepe, Burro, Martio and El Diablo. Other two characters making up the higher ends of the payable include ring girl Violeta and referee Ricco. The rest of positions are covered by playing card symbols. The luchadores are the top paying symbols and all of them award 300 coins for a five of a kind combination.

Lucha Legends offers the Super Wild feature you can trigger at random during the base game. When Wild symbol appears on the reels and contributes to a winning combination in the base game, one of the luchadores will appear and smash it. The feature can turn two adjacent symbols Wild or add a 2x or a 3x multiplier to your wins. In case you activate the Power Up Mode, you can benefit from 4 extra Wilds or a 3x or a 5x multiplier. When playing the game in the Power Up Mode, the Super Wild feature can be triggered more often.

The wrestling belt stands for Scatter that can appear on the reels 1, 3 and 5 only. Once you get Scatters on all three reels, you will unlock the free spins feature awarding 10 free games. The feature can be retriggered in the same way. What’s more, whenever you land 2 Scatters anywhere in view, 1 extra free spin will be awarded. Within the feature, non-winning Wilds can become Super Wilds as well.

The Super Wild feature makes Lucha Legends stand out from the crowd especially during free spins when it will turn non-winning Wilds into Super Wilds. The game will provide you with an enjoyable gaming experience thanks to its vibrant graphics, cartoon-like animations and an engaging music score. Those who like to take risks can make use of the Power Up Mode and boost their winning chances additionally at an increased bet.

Games Publisher at Microgaming David Reynolds says that Lucha Legends is a fun and vibrant slot that taps into the global popularity of professional Mexican wrestling.

“It captures the drama and excitement with several big-hitting features. In addition to 10 free spins, which can be retriggered, the Super Wild feature and Power Up Mode aim to enhance gameplay and increase the player’s win potential. This is a beautifully animated game designed to deliver round after round of action and entertainment,”

Although Lucha Legends is not unique when it comes to its theme, the Microgaming’s take on Mexican wrestling deserves your attention. It bonus features along with crisp visuals, engaging sounds and a maximum potential win of 165,000 coins will keep you glued to the screen of your nearest desktop or mobile device, we bet.