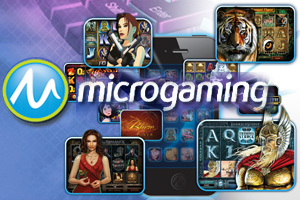 It will not have escaped your notice that many of Microgaming’s newer All Ways slot games come with a special Wild Reels bonus feature. That bonus feature is a randomly activated one on which once triggered one to five of the reels will magically be turned into wild reels.

Whenever that bonus feature has been triggered you will be sitting there praying that all of the reels get turned wild. If they do you will be awarded with the very highest possible jackpot payout available on the base game!

However, being randomly awarded features you will never know just when one of them will be triggered. By playing any of the slots they are attached to for long periods of time it is possible to work out on average just when each of those wild reels bonus gamed could be triggered.

With that in mind below we have listed the most played slots from Microgaming offering Wild Reels bonus features. Alongside each of them you will find an average number of base game spins you will have to play off to have a chance of triggering those wild Reel features!

Thunderstruck II – It is the Wild Storm feature attached to the Thunderstruck II slot game which is going to see you being awarded with up to five wild reels whenever it is triggered. Based on a long number of base game spins played off on this slot game we have worked out you should trigger the Wild Storm bonus feature once every 155 base game spins.

Immortal Romance – The wild reel bonus game on offer to players on the Immortal Romance slot is known as the Wild Desire feature, and when playing this slot you should on average trigger that feature once every 160 base game spins you play off.

The Finer Reels of Life – Another slot which is popular with players on which a wild reel bonus feature could be awarded to you is the Finer Reels of Life slot game, and based on our own data you should on average trigger that feature once average every 155 base game spins, which is much like the Thunderstruck II slot game listed above.

However, please keep in mind that as those bonus games are all randomly awarded to you there will be times when it will take much more than the listed average number of base game spins before you do trigger their respective wild reels bonus features.

But it is of course perfectly feasible that you could trigger those features in a fewer number of base game spins and with some luck in playing you could trigger them in fairly quick succession too. So do try and give any of the above named slot games a little bit of play time. You really will be on the edge of your seat when those features are finally triggered and the reels slowly start to turn wild!