Having achieved success with several titles featuring level-up mechanism, IGT delivers yet another for benefit of those who enjoy claiming achievements. Harley Davidson Freedom Tour is an engaging high-octane affair in which progress is made with each bonus symbol, every single one a step towards unlocking new and exciting features. A handy map has been provided to show the rider how far they have arrived and the distance that needs to be conquered in order to unlock the next reward. Harley fans might say there’s no replacing the excitement of saddling the real thing, but let’s not underestimate opportunities offered by the virtual world and exploited by one of the industry’s best.

Gear Up and Hit the Road 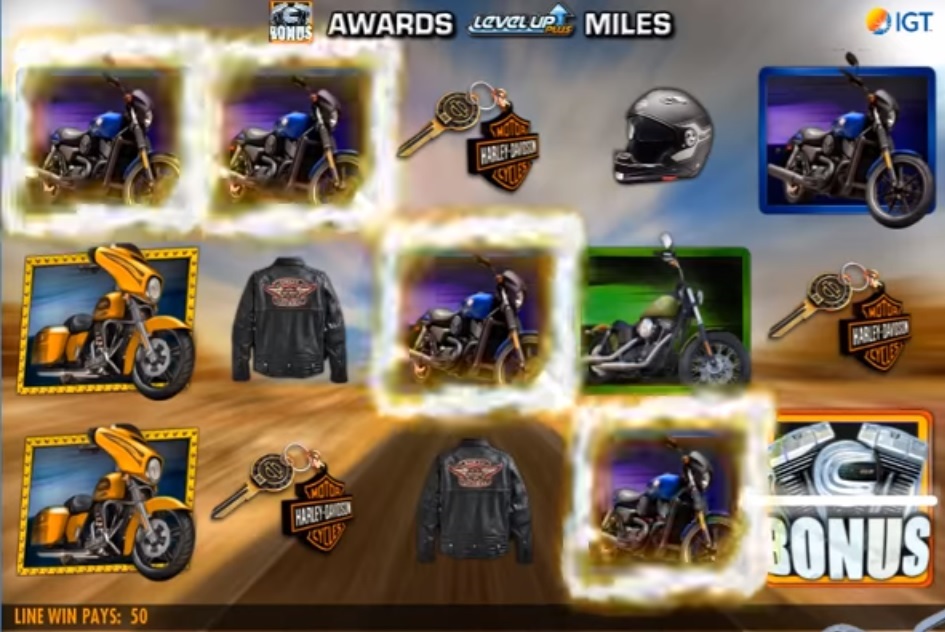 Harley Davidson Freedom Tour is a 5-reel and 30-payline slot with an RTP of 96.6%. The transparent reel area is set against a road made to look as if speeding through a desert on a hot summer day. Winning combinations are formed by the legendary bike presented in a variety of colours, appropriate gear including leather jacket and helmet, and last but not least, keys needed to get the beast roaring. Which is exactly what you’ll be listening to, along with an upbeat tune, while reels spin to hopefully land bonus icons needed to move across the map. In meantime, one has to make due with Wild game logo acting as a substitute and randomly activated Rumbling Wilds feature which makes up to 4 symbols turn Wild themselves.

Ride the Road to Riches

Every non-triggering Bonus icon awards one mile, and once it appears on reel 1, 3 and 5 simultaneously, players will take a shortcut to the next stop and receive the Road to Riches Bonus. One is then prompted to spin the wheel and collect the corresponding prize. While rookies have the opportunity to win monetary rewards only, as riders progress and claim new positions on the map, an array of different benefits becomes available. Free Ride Free Spins bonus is followed by Expanded Top Award which increases the chance of landing one, Showroom Bonus picker, RMP Multiplier applied to an additional free spin win, Custom Shop Bonus, and finally Bonus Trigger Boost. The later requires one to travel quite a distance, but the prize is well worth the trip: it will unlock a mystery feature randomly triggered after certain reel spins. While active, one or two Bonus symbols will launch the Road to Riches bonus.