Spaghetti Westerns have marked an entire era in cinematography, and the intensity of old classics with Clint Eastwood’s magnetic charm and John Wayne’s all-American silver screen persona has never been captured with the same level of success. The attempts to revive and replicate whatever it was about the 60s that made the genre so iconic has failed, however, the reminders of the days gone by are still welcome. Possibly driven by pure sentimentality, Play’n Go has decided to revisit the theme and strum hard at our nostalgic cord. Their latest release, Gunslinger Reloaded incorporates all the elements that were crucial for a cowboy movie plot – the wanted poster, a saloon, and the infamous possy of gunslingers.

Played on 5 reels, 3 rows, and 25 fixed paylines, the Gunslinger Reloaded is presented on the familiar, easy to navigate, Play’n GO platform. The bets are adjusted manually using the bar with the pre-set amounts at the bottom of the gaming screen, ranging from $0.25 to $100 per spin. Using the Auto Play feature to the right, the players can start up to 500 uninterrupted spins, which can be stopped manually or by selecting the factors that will end the mode early. Additional settings can be found under the sandwich bar in the left bottom corner which allows the players to turn on/off the sound, Fast Play option, etc.

The members of the notorious band of gunslingers are the game’s featuring characters, glaring at you from the wanted posters. Each of the outlaws has a different “bounty” value and for a multiplier to be applied, the players will need to chase after one of the three criminals on the loose: Wild Bill, Jesse Picket, or Butch Curry. The Sheriff is the Wild and the White Horse icon is the Scatter – the only symbol that pays both ways. In terms of value, the Money Bag, Saloon Girl, and the Pistols would be categorised as the medium value symbols, while the playing Cards with the stacked chips are the lowest ranking icons.

An extra symbol that can trigger the Bottle Spin feature is, of course, the whiskey bottle that starts the Free Spins session when at least three of these icons land on the reels. During this bonus, all winning amounts will be doubled, and additional spins can be won if the triggering combination is formed again while the bonus is in progress. Gunslinger Reloaded slot comes with sort of a poker game variation which can win you the slot’s progressive jackpot. To unlock the big win, one must collect all of the low ranking card symbols with the Sheriff’s star– pressing the bets will improve the odds of winning the progressive jackpot. The cards cannot be collected while the Bottle Spin feature is active, so don’t get your hopes up during the free spins… 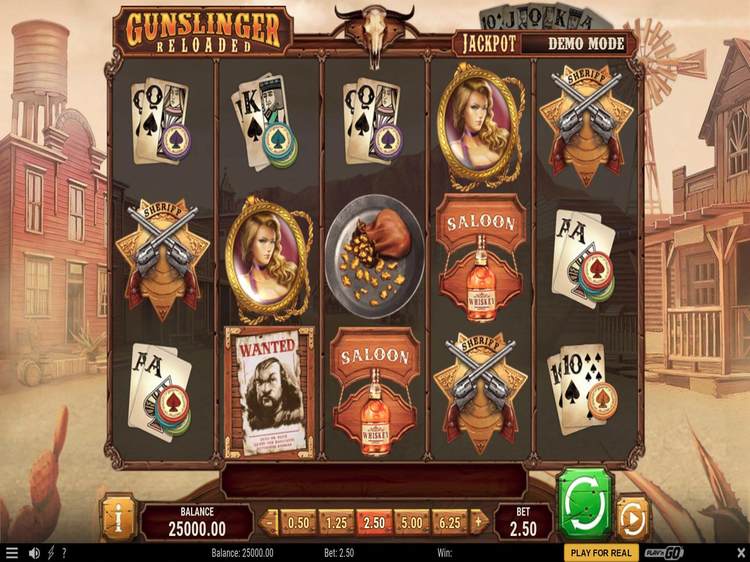 As mentioned above, the posters with the gang members will apply a certain multiplier to the payout – the players themselves can choose the potential level of risk and the multiplier that will be attached to your winnings. By selecting one of the three outlaws, you will initiate the Bounty Hunt feature and start hunting down the criminals. The choice of the character to pursue will determine the value of the multiplier. Wild Bill will increase the payout by 4, Jesse Picket doubles the won amount, and Butch Curry multiples your winnings by 3. Before making the final choice, it is important to remember that higher multipliers carry a higher risk so if you prefer smaller but more probable payouts, Jesse Picket is your man.

Players who are old enough to remember the 60s, as well as those who appreciate classic cinema, will definitely enjoy Gunslinger Reloaded and its old-fashioned, retro quality, inspired by all that we hold dear in Westerns. At the same time, this particular theme has not often been exploited by the software developers, and Play’n Go bringing it back is a welcome breath of fresh air. Apart from the interesting theme choice, the slot also offers bonus features that are quite enjoyable and related to the actual background story of the slot, presenting the players with the opportunity of choosing their own risk and payout level.

According to Johan Törnquist, Play’n GO Chief Executive Officer, the designers of the game were dedicated to honouring the Western genre legacy and staying true to its conventions:

The western genre is extremely popular and well-known all over the world so, when designing a game like this, you have to be very faithful to the conventions of the genre. Our producers made sure that the game captures the look and the feel of the Golden Age of Westerns, in both the main game and all of the added features, containing some of the most popular elements, to give players an immersive experience.

As always, the game is available in the demo version. Those who would like a test drive before fully committing to catching the outlaws and bringing them over to the swift hand of justice can play the game for free on Play’n GO official website or visit one of their partnering online casinos.