Spring is in full bloom across our favourite online casinos and we know you are anxious to find out what are the slots to look out for this April. Well, we’ve done the research for you and turns out lots of software developers have been busy lately. Elk Studios, Playtech and other well-known providers have given us some interesting titles to enjoy throughout this month and beyond. Find out more below.

Released on April 10th 2018, Elk Studios’ Lake’s Five video slot tells a story about slick Mr. Lake and his exciting heist. Mr. Lake is a buck who gathers a team of five friends: a monkey, a fish, an elephant, a bird and a crocodile and they plan their Ocean’s Eleven style heist – the plan is to take over Mr. Romano’s tower and claim his immense fortune. In this game that is a crossover between an animal-themed slot and crime/suspense game inspired by Ocean’s Eleven players can win up to 216,000 coins! The evil Mr. Romano doesn’t stand a chance against a party of skilled con artists that accompany Mr. Lake and you can find that out for yourself if you spin the reels of this majestic action and feature-packed slot by Elk Studios.

This April, you can turn up the heat even more with Pragmatic Play’s Fire88 slot machine. It is a Chinese-themed 3×3 slot game that blends traditional land-based machine engine with advanced features. Don’t let the simple mechanics fool you – you can get seriously burned with Fire88! Riding on the wave of the 3-reel slot revival, Fire88 boasts 7 paying lines which are always active. Doing the match in this case is not so hard – there are 9 cells in total on screen, aka 9 positions for symbols to land. The symbols include single, double and triple BAR signs in form of fireworks, Chinese coins, yellow gems and sevens bursting in flames. The dragon mask is the Wild, and two of them trigger a re-spin.

Three double eights trigger the Jackpot Bonus Game, which is a pick-me bonus. You need to choose among 9 coins and find one of the three fixed jackpots: Mini (pays out x38 the stake), Major (x88) and Grand (x888). To sum up all the benefits of Fire88 we can say that the game features high payouts, great variety of symbols, re-spins, three jackpots, a fine, clean design and a convenient interface for both desktop and mobile play. The theoretical RTP is set at 96.52%. 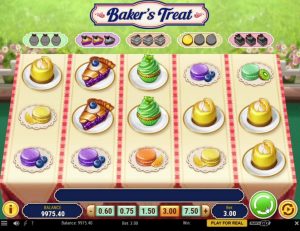 Watch out, because you may gain a pound or two while playing Baker’s Treat, the brand new video slot from Play’N GO inspired by delicious cakes and colorful macarons. The game’s fascinating design will win you over right away as you lay your eyes upon a table with a plethora of different sweets: Strawberry Sponges, Lemon Cheesecakes, Carrot Cakes, Macarons of sorts, Blueberry Pies and Cupcakes. Play’N GO delivers a 5-reel, 3-row slot machine with 15 paying lines which are active on default. The twist is that they pay both ways, so it’s great to know you can form winning combinations starting from the leftmost or starting from the rightmost reel.

The creativeness of the Play’N GO team really stands out in the features; you’ll notice particular cake tokens on the top of every reel. Every time a full stack of cakes lands on the associated reel, you’ll collect one token. Get three identical tokens and you’ll activate the Flour Power Spins round with 3 gratis spins. Depending on the tokens, you can receive different combinations of free spins, Wilds, matching reels and expanding Wilds. Thing get really pumped up when you collect 5 cake symbols on a reel with the same token; that triggers the awesome Bake Off feature, during which you can win 5,000 times the bet! Start looking for your apron, because it’s time for baking some sweet wins! 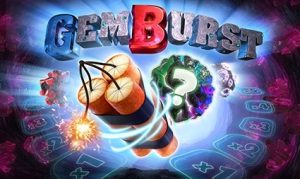 Gem Burst is a graphically advanced online slot game just released by Playtech. The game is set in space and shows bursting rocks revealing their riches across 5 reels and 243 ways to win. Gem Burst is packed with sharp visual animations and that considerably elevates its quality, since the theme itself about rocks in space doesn’t offer much substance, does it? Wisely, Playtech introduces several types of rocks as symbols and rock-like A, K, Q and J for lower values. Gem Burst is a slot with Cascading Reels mechanism, so expect to see winning symbols disappear while new symbols above them drop into empty spaces, potentially forming more combos. The game adds multipliers to successive wins and increases the multiplier value from 1x to 5x as the wins occur one right after the other.

The two main features are the Blasting Free Spins and the Hidden Symbol Mystery round. You need 3 or more Blasting Games symbols to trigger free spins and receive from 6 up to 30 free games. As an innovation, you get to place Blasting Free Games bombs below a reel (up to three bombs max) and they will determine the total number of free spins you’ll get. The mystery symbol pops up randomly during free spins and detonates all the bombs, resulting in a massive payout. The maximum win on a single spin is 2,500x your stake. Bombs away!