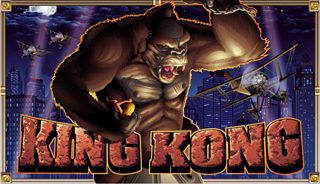 It was back in 2011 that Playtech designed and then launched the King Kong slot game, and whilst that slot was released many years after the 2005 film that it is completely themed and based around, it soon became a very popular with slot players.

Being a Playtech designed slot game that does of course mean you are going to have the ability to play it either for free or for real money. We would suggest you do the former initially as you will then be able to judge for yourself whether it is the type of slot machine you will enjoy playing for real money.

You will also find the King Kong slot game is available to play via Playtech’s instant play gaming platform or via their fully downloadable platform. However, no matter how you choose to play it we are confident the bonus games and bonus features it has to offer you will be lots of fun and could enable you to win big when playing it for real money!

When you start playing the King Kong slot you will initially be playing in the mode which is known as the Jungle Mode. This starting mode has two different bonus games that you can trigger and the first is a wild re-spins feature.

That feature will see you being awarded (once you have spun into view three or more of the King Kong scatter symbols anywhere in view) a set of three re-spins. During those free spins the wild symbols will stay locked into position as they are sticky wilds and as such if you spin in enough of them in the right positions those re-spins can and will award some large amounts of cash. 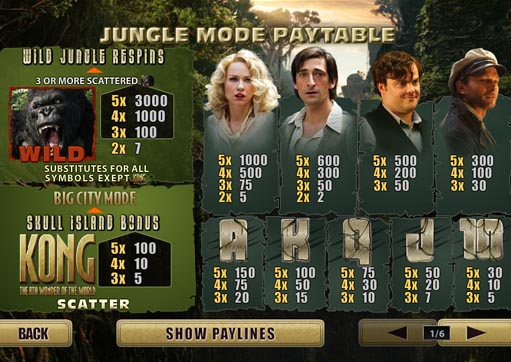 That second bonus game is known as the Skull Island feature round and when you finish playing it off the slot will then switch over to the second mode of the game.

This second mode also boosts two bonus feature games. The first of which is a re-spin feature on which, once you have triggered it, the first re-spin will have reels one and five becoming completely wild, on the second re-spin both reels two and four will be completely wild and on the third and final re-spin reels one, three and five are completely wild!

Play the King Kong Slot at These Casinos

Mansion Casino
100% up to £200 for New Players at this UK Licensed Casino - *Significant Terms and Conditions:
Play