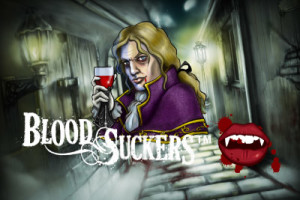 A Vampire theme is what NetEnt’s 25 optional payline Blood Suckers slot game has to offer players, and being one of their video slots you are going to find that when playing it you have the chance of triggering not one single bonus game but two different bonus games.

Those bonus games are triggered via a set of scatter symbols or by lining up on activated paylines a set of bonus symbols, however you will have the maximum chances of triggering the bonus symbols awarded feature round when you are playing all 25 lines per spin.

The slot itself comes with a range of different coin value settings, which start at just 0.01 and you will also be able to play up to 100 coins per base game spin by playing four coins on each of the 25 pay lines.

One of the main reasons we want you to consider playing the Blood Suckers slot game is that it boasts a huge certified long term expected RTP which is 98%, and that very fact alone should ensure you get plenty of play time from your bankroll when playing it due to the high frequency at which the winning payouts listed on the pay table and the bonus game payouts are triggered and awarded to you.

Let us now walk you through the bonus games that you can trigger when playing off a single base game spin on the NetEnt designed Blood Suckers slot.

The first bonus game which does befit the theme of this slot perfectly is the pick a coffin bonus game. To trigger this pick to win styled feature round on any activated payline from reel one onwards and then on adjoining reels you will need to get at least three bonus symbols.

By lining up one of those combinations of bonus symbols you will then be presented with, via the bonus game screen, 12 coffins, you must pick a selection of them in the hope that when they have been opened and a Vampire appears. Once you slay the Vampire the coffin will then display a high amount of coins, which you will then be credited with.

There is also a set of free spins waiting to be triggered as you are playing this slot, and the way in which you are going to get to play off a set of free spins is by spinning in three or more of the scatter symbols anywhere on the base game screen.

Three or more scatter symbols will award 10 free spins on which any and all winning combinations that are spun in will be tripled in value.

A set of wild symbols are also in play on each of the Blood Suckers slot games five video reels, those symbols stand in for all others but not the scatter or bonus symbols. Five of the wild symbols spinning in on any payline in play will award the base game jackpot which is worth 7500 coins for each coin on that line you wagered.

Check Out These Other Good NetEnt Slots… 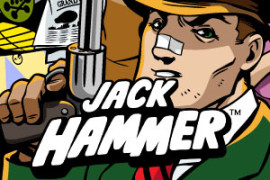 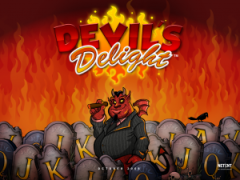