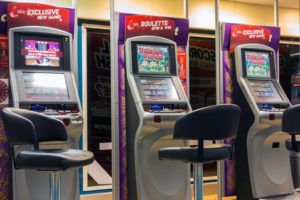 If you are a fan of playing slot games on the Fixed Odds Betting Terminals or FOBT’s as they are known in you local betting shop, then some things are possibly going to change on those machines.

There has been, for a couple of years now, talk of MP’s banding together to force the Government to act to reduce the maximum stakes on those machines.

Well, it finally looks like a Parliamentary Group may be about to do just that and they are proposing that players of FOBT’s should no longer be allowed to place wagers of up to £100 per game or spin on any of the games found on those machines and that the maximum stake should be dropped to just £2!

It is the Roulette games that do appear to be causing the most problems on the FOBT’s as the newspapers are full of ongoing stories of how people lose thousands of pounds on each session, however any restrictions put in place regarding the maximum stake will of course affect the large number of slot machines that players can access on those machines too.

This is a rather strange situation as any FOBT player can go home from a betting shop, and they can then sign up to and play at an online casino site and can then wager much more than £100 per spin or game played on any of the games available at such a casino site!

Shares in all of the major UK betting shop owning companies dropped as soon as news of this new proposal by the Parliamentary Group made up of MP’s from all Political Parties was announced.

In fact, it is looking more and more likely that there may be some form of maximum bet stake restrictions coming into force sooner rather than later and as such if you are a high stake slot machine player then you should consider moving your slot playing action online.

If there is one thing that no gambler likes being told what to do it is being told they can only place a certain amount of cash as a wager limit on the games they are playing, and whilst many slot players are happy to play for stakes of £2 or lower, Roulette players are not going to be happy with such a maximum bet restriction!

You will earn comps points based on how much cash you wager through the online slot machines and you will also be able to claim bonuses such as no deposit and deposit match bonuses that will boost the value of your deposits when you claim them.

Plus, you are also going to be able to take part in lots of online slot tournaments too, so many be it’s about time you did stated paying online slots where you will never face stake restrictions!