Inspired by oriental mythology, Dragon Maiden slot is a high-volatility slot that features Geneth, a female warrior who must defeat the Red Dragon and harvest the beast’s powers. Although this is a heavily exploited approach, Play’n GO is up to the task of creating a slot that’s both visually appealing and carries a great payout potential.

The slot also introduces a payline system that switches from 243 to 7776 betways during the Free Spins, significantly boosting the player’s winning odds. The return to the player percentage over an extended gameplay session will come up to 96.49% RTP, which is pretty standard for Play’n GO slots, while the total payout can reach the whooping 5,000x player’s stake.

Geneth the Dragon Maiden is the slot’s Wild, carrying the highest value and replacing all other symbols. The Ruby and the Amethysts rings are next in line, followed by the medium value icons, the Knife and the Green Dragon Coin. Card suits – Hearts, Spades, Clubs, and Diamonds – are the lower value symbols, with the payout range of 10 to 100 coins.

The Red Dragon is the Scatter and the only icon that cannot be replaced with the Dragon Maiden Wild. When 2 or more of these symbols land on the connecting reels, bonus features will be unlocked. All combinations are paid from left to right, starting from the 1st reel.

The bets start at $0.20 and the players can adjust them manually, selecting the amount from the tabs at the bottom of the game screen. The maximum amount that can be wagered per spin is $100. Using the Auto Play command, you can start the session of up to 500 Auto Spins, which can be ended on any win, when a bonus feature is triggered, when your balance reaches a certain limit, or after a certain payout amount is accomplished.

Play’n GO platform also allows some additional customisation, and one can increase the gameplay speed, completely turn off the sounds, or use the space bar to spin the reels. 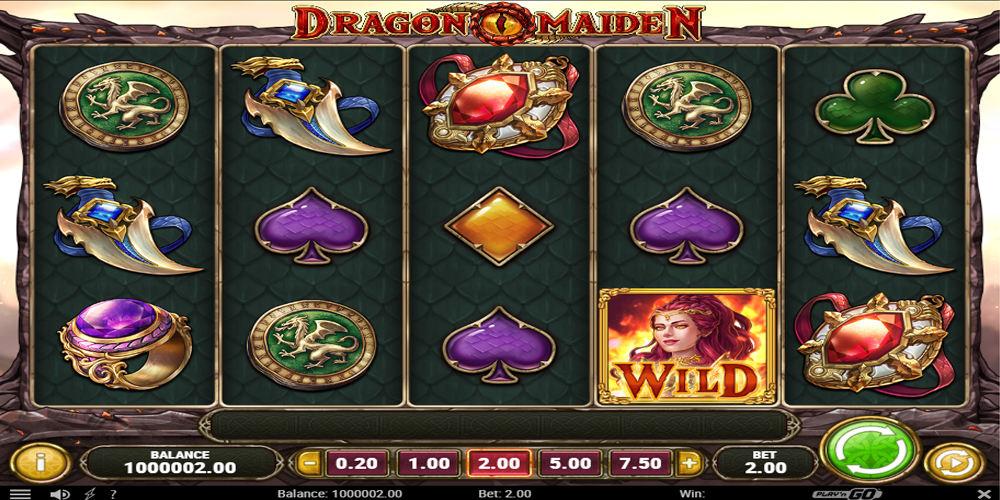 When two Red Dragon Scatter icons appear on the consecutive reels, a Re-spin will be triggered and the reels with the Red Dragons will remain locked while the rest of the columns continue to spin. During the Re-spin, additional Red Dragon icons can land on the spinning reels and activate an extra Re-spin.

The combination of 3 Red Dragons will initiate Free Spins, during which these symbols will expand the reels and increase the number of positions from 3 to 6. When the reels are fully expanded, Golden Free Spins will be triggered.

Golden Spins sessions will begin immediately after the Free Spins have ended, adding extra paylines. Instead of playing on 243 lines, the slot will now provide you with 7776 winning ways for as long as the feature is active. Once the bonus mode expires, the number of lines will be once again reduced to 243.

Dragon Maiden slot offers a payout potential of x5,000 the player’s stake, which can amount to $500,000 on the pressed bets. The Dragon Maiden symbol alone pays $1,250 for a combination of five (or x12.5 player’s bet), which means that you can hit some pretty generous payouts – providing that your budget can handle the high variance gameplay sessions.

Play’n GO has definitely managed to create yet another visually stunning slot, however, the bonus features are too basic to make a lasting impression and keep you chained to your screen. On the other hand, the amazing payout potential of $500,000 is more than enough to compensate for the lack of more engaging bonuses and profit-oriented players who are willing to maximise their stakes will enjoy Dragon Maiden immensely.