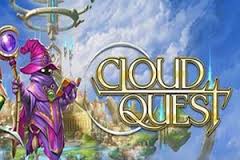 The Cloud Quest slot game marks a new direction go for Play n Go who are probably best known for their mobile slot games, for this is a high definition online slot boasts a brand new playing structure and format that has never been seen before on any of their previously launched slots!

The first thing that you will notice if you do decide to play the Cloud Quest slot is that is a five reel slot and on each of those reels there are five visible reel symbols. However, the way in which you form a winning combination is by spinning in at least three or more matching symbols in a line either diagonally, vertically or horizontally across the screen.

By forming a winning combination as described above then those symbols will, once credited to your win meter, be removed from the screen and symbols directly above those now missing symbols will drop down to fill in the gaps left by their removal.

That does of course mean that on one spin you can win multiple times consecutively, and as long as new winning combinations do get formed then the remove and replace base game feature will continue to play out! 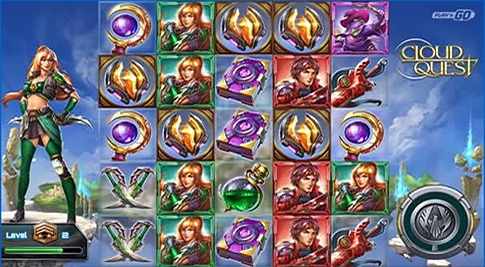 By spinning in the Power Stone reel symbols anywhere in view those symbols will then in turn fill up the Power Meter and by doing so you will get the chance of being awarded with additional Super Powers!

The Power Meter feature is triggered when you have filled in 10 positions on the Power Meter via the base game, and once triggered an arrow will spin around the wheel and can award one of four Super Powers, all of which you will find an overview of below!

Five of Fortune Feature – When this feature is awarded to you all winning combinations that you have formed instantly will be boosted by a multiplier of x5, and as such some rather large winning payouts could be coming your way!

Emblem of Endurance Feature – This feature will see each of the initial spun in wild symbols staying locked into place during the remove and replace base game feature until such a time that they have formed an all wild symbols winning combination!

Try that Cloud Quest Slot at These Casinos