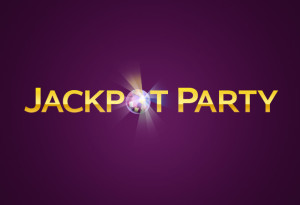 The online gambling environment is always known for being fast moving and one in which sites and gaming properties change hands quite quickly, however we can truly say that not many people were in the know in regards to the online casino software company Skill on Net making an offer and being successful in purchasing the Jackpot Party Casino site!

It was their unique and exclusive range of WMS slot machines that made the Jackpot Party Casino such a successful site and many commentators are speculating on the reasons why they have chosen to sell their online gaming site to Skill on Net. Whatever the reason is, the deal has now been done and players can now access those WMS slots at the newly launched Skill on Net owned and operated Slots Magic site.

There are of course going to be some minor and in fact major changes planned for the Slots Magic site in the coming months, for with Skill on Net now being the proud owners of the player base and of course the new range of WMS slot games they will have plenty of their own in-house designed games on offer alongside the WMS slots.

To try and get even more players signing up they have also put in place a range of new player sign up bonuses which are spread over a players first few deposits, so should you both enjoy playing Skill on Net and WMS designed slot games and be seeking ways of locking in additional playing value then you should consider signing up to the Slots Magic site and taking advantage of their set of welcome bonus offers which will certainly allow you to get the maximum playing value!

Players of the Jackpot Party Casino will recall that they did have some very generous and liberal terms and conditions attached to their player bonus offers, and we are glad to report these fair terms have been carried forward over to the Slots Magic site, so you will not find taking a bonus traps and locks up your deposits into huge play through requirements.

The VIP Player Rewards Club is also still in existence at the newly launched Slots Magic Casino site, and as such whenever you log in and play the range of games offered at Slots Magic Casino much like when you were playing at the Jackpot Party Casino site you will still be earning large amounts of comp points which are redeemable for casino chips at some preferential redemption rates. 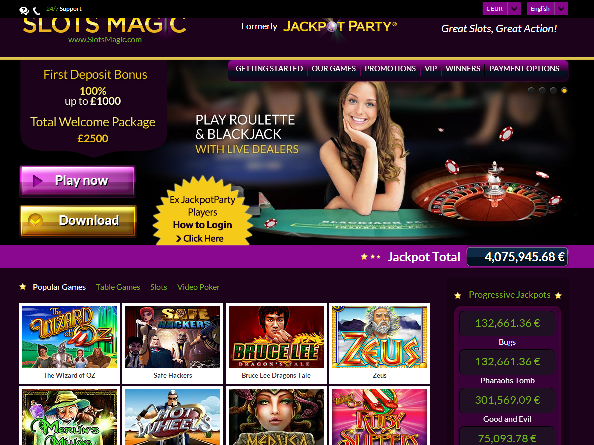 One question that you may be asking is will the randomly awarded progressive jackpots that the Jackpot Party Casino site were famed for still be on offer at the Slots Magic site, well we are pleased to report that they are and as such when playing any of the WMS slot games you will still be able to be awarded, completely at random the Jackpot Party Bonus game feature round.

This is a very unique aspect of WMS slot games and one that a lot of players benefitted from, for at the end of any single paid for spin on the slot games reels, and irrespective of the stakes at which you are playing that slot game for the Jackpot Party bonus game feature could be awarded to you.

Once it has been then a brand new bonus game screen will launch onto the slot games screen and this is a grid like formation of presents, and you are simply tasked with selecting one present at a time in the hope you reveal a cash prize, and if you do you then get to pick again, or should you reveal a Star then you are awarded the smallest valued progressive jackpot and then a new bonus screen will launch and load.

The idea of the randomly awarded Jackpot Party bonus game is that you manage to reveal a Star on each of the five different stages of the game, and each time you do then you win the next highest progressive jackpot attached to the game.

However, at any point during this Jackpot Party bonus game feature should you reveal one of the character symbols then the bonus game instantly ends, and any accumulated cash prizes awarded up until that moment in time will be credited to you and the game then reverts back to the base game!

Should you have any funds remaining in your Jackpot Party Casino account then you are quite able to sign into the Slots Magic Casino site using your original log in details to access your funds.

The Slots Magic site has in fact got many more banking options on offer than the Jackpot Party Casino site did and as such if you do decide to make a withdrawal or real money deposit then you are going to be able to pick one of many different methods to do just that.

The online banking interface is just as easy to access and use as the Jackpot Party Casino site was and as such you should not run into any kind of difficulties playing at the Slots Magic Casino site.

You will be able to access the usual highly trained customer support team 24 hours a day at this newly launched Slots Magic site, so if you do have any questions what so ever or are seeking any additional information then do get in touch with the support team for they are a friendly bunch and nothing will be too much of a problem for them, give them a try and see for yourself!