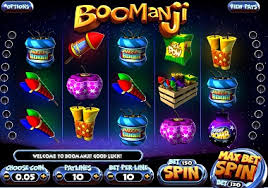 So confident are BetSoft Gaming, the 3D slot game designers behind this Boomanji slot game that players are going to love playing one of their recent slot game releases, that they have launched it on both their online gaming platform and also their mobile gaming platform at the same time.

Usually they let a machine start its life online to gauge the popularity of the slot before making it available to mobile phone or tablet device users, however thanks to the way this 10 payline slot works and plays it is a guaranteed sure fire winner!

It does only come with one bonus game but thanks to the way in which the reel symbols not only pay from left to right on the screen but also right to left you have double the chances of spinning in a winning combination!

One of the only 10 payline 3D mobile video slots we have seen is this Boomanji slot game, which takes pride of place on the BetSoft Gaming “To Go” mobile gaming platform. Both the number of paylines and coin values you can put into play are adjustable and the coin value settings are 0.01, 0.02, 0.05, 0.25 and 0.50, and you are also able to play up to ten coins per line per spin.

You will find that the Jackpot symbols in play on BetSoft Gaming’s Boomanji slot is a symbol with a Red, Green and Blue set of Fireworks on it, and whenever you spin in a line of five of them on an activated payline then a payout worth 250 coins is awarded.

When you are playing all of the ten coins per line this jackpot is therefore a much larger 2500 coins. However the coin values and number of coins you can play are all adjustable so both low and high rolling slot players will find this slot can be set at stake levels they can comfortably afford.

Free Re-Spin Feature – You are going to be given an additional way of winning whenever the Wild symbol spins in. This symbol is the Fireworks Crate symbol which is only attached to the second, third and fourth reels.

Whenever it spins in on any of those reels it will first bounce then expand in such a way that all of the reel positions on the reel it has spun in on become Wild symbols, any winning combinations that are then formed are credited to your bank then the Free Re-Spin feature kicks in.

This will see the Wild reel (or reels if more than one reel has a Wild symbol on it) staying locked in place, with all of the reel positions on that reel remaining wild symbols, and then the remaining reels will re-spin just once, and as such additional winning combinations may be formed, if they are the winning payouts are then awarded to you and the game returns to normal play.

However if another Wild symbols appears on the re-spun reels, then that reel first expands and is locked into position with the original wild reel and an additional free re.-spin is awarded.