Unveil Enchanted Riches with Book of Oz Slot by Microgaming 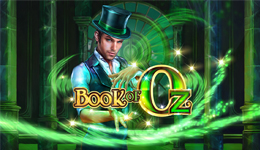 It’s been a while since the last time you visited The Emerald City where the mysterious Wizard of Oz lives. We may be grown ups, but we never grow out of some fantastic stories. The Wonderful Wizard of Oz is definitely one of them and if you read it today, you can find new layers of meaning and symbolism you may not be aware of as a child. One of the most popular children’s novels ever served as a source of inspiration to Triple Edge Studios, an independent game studio, to develop their Book of Oz slot. The game is created exclusively for Microgaming-powered casinos where you can play it since December 11.

There is no Dorothy, Toto, Scarecrow, Tin Woodman or Cowardly Lion on the reels of the slot machine. Instead, the game comes with a twist featuring bottles containing what the three weird characters were looking for – a heart, brain and courage. Book of Oz slot is a high volatility title featuring 5 reels and 10 fixed paylines. So far, Triple Edge Studios has developed eight high-quality slot titles for the renowned gaming company and this one is no exception.

Commenting on the launch of Book of Oz, Brendan Walton, Design Lead at Triple Edge Studios, said that they had fun while developing the game.

“Bespoke hand-painted art was created to help tell our fantastical tale. Infused with fantasy and adventure, Book of Oz will leave players spellbound,”

According to David Reynolds, Games Publisher at Microgaming, Book of Oz slot is another fantastic creation by Triple Edge Studios enriched with magical artistry and packed with rich game mechanics.

“Players can listen to an intriguing soundtrack while immersing themselves in the game to uncover an enthralling storyline as they play,”

The graphics really look brilliant with the reels set within the Wizard’s castle. While in the original story the Wizard turns out to be an ordinary man, in the slot in question, the wizard is a young man with a cylinder hat and a mysterious look. He is the top-paying symbol awarding 5,000 coins for five of a kind. Other high-value symbols are bottles with keys, hearts and courage while the rest of positions are covered by playing card symbols.

The Re-Spin feature adds more excitement to the gameplay allowing players to spin only one reel at a certain cost to complete a winning combination or trigger the main bonus feature. The higher the odds of winning the bigger the price of a re-spin. Look out for the golden book symbol as it acts dually, as Wild and Scatter, thus completing your winning combos and awarding free spins.

As for free spins, the feature reminds us of the one in the legendary Novomatic slot machine Book of Ra. Triggered by 3, 4 or 5 Book Scatters, the feature awards 10, 15 or 25 free spins. Before the feature starts, one of the symbols will be selected at random to act as an expanding symbol that pays regardless of its position. It expands only when it can create a win and payouts from these combinations are awarded on top of regular winnings from the feature. The free spins feature can be retriggered to provide you with more chances of winning without risking your own money.

A familiar theme and gameplay with a new twist coming in the form of paid re-spins make the Book of Oz slot a must play game. Being a high volatility slot with a maximum potential win of 5,000x your total bet, the Microgaming-powered game guarantees an exciting gaming experience with payouts that may not land very often but can be quite large.