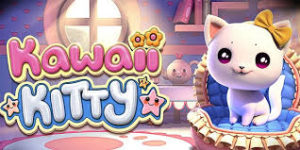 Fans of BetSoft Gaming’s range of 3D slot games have no an additional slot they can get stuck into playing, that being the new Kawaii Kitty slot, which may not be as advanced in regards to its bonus games and bonus features, but it is a slot we enjoyed playing!

There are, as you would expect plenty of ways to configure this new slot, however the basics of the game are that you can form a winning combination both ways and also it has only 10 fixed pay lines.

That means you will not be paying a small fortune on each spin you play off more so when you play it only the lowest coin value settings which for reference are 0.02 coin values! That Both Way playing structure doesn’t require any form of bonus bet either, so for 10 coins per spin or as many as 100 coins you can play it for stakes you can afford!

All of the reel symbols are based around the theme, which is a Kitty theme, and there are some excellent sound effects and backing tracks that will be playing off whenever you send its reel spinning.

Let us now enlighten you more on the playing structure of the Kawaii Kitty slot and also let you know about what makes it a slightly different slot game to play. But keep in mind this is an instant play slot and one that does boast the usual 3D BetSoft Gaming graphics.

Wild Re-Spin Feature – One the middle three reels you can spin in a special Wild Yarn reel symbol, that symbols not only stands in for every other reel symbols on the pay table of the Kawaii Kitty slot but it also expands when it has been spun in.

As soon as it has expanded and any winning combinations formed have been credited to you the reel or reels that the Wild Yarn symbol sun in on will be held into position and the remaining reels will then Re-Spin, giving you an additional chance of winning a second time!

Low Variance Slot – Unlike many other BetSoft Gaming designed slots this one comes with a low variance type of playing structure and format. The base game jackpot is only 250 coins however that winning combination will spin in more often than the jackpot paying combinations on more other slots, and you do of course get paid 500 coins when it has been spun in due to the Both Ways playing structure.

You can play the Kawaii Kitty slot right now at any casino offering the BetSoft Gaming range of slot games either for free or for real money.