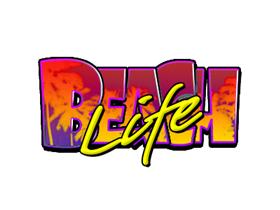 The Beach Life slot game has been available to slot players at Playtech powered casino sites since late 2006, and this particular slot game has become one of the most played slots that Playtech have ever designed, and the secret to its success has to be its great playing format coupled with the fact that there is a rather large and tempting progressive jackpot that can be won when playing it!

This is not however one of the cheapest progressive bonus video slot games to play as the coin values are all fixed, so if you are seeking a low stake type of slot game then maybe you should take a look at some of our other progressive slot game reviews instead!

The progressive jackpot is not won that often on the beach Life slot game, in fact on average it is won every 202 days, and whilst this may seem like a huge amount of time between the jackpots finally hitting, the value of the jackpots on offer often grow into the millions, so if you are lucky enough to win it then boy, is it worth winning!

However if you spin in that jackpot paying set of winning symbols on any other payline other than the 20th payline then instead of the progressive jackpot you will win 100,000 coins instead, and based on the coin values being static at 0.50 coin values that non progressive jackpot is a mighty 50,000.00 in cash so is well worth winning!

The Sun symbols have also got a set of smaller payouts attached to them when you line up, from reel one onwards a matching set of them on any activated payline.

The only symbols that the Sun Wild symbol does not stand in for are the Bonus symbols and the Scatter symbols, the Bonus symbols will trigger a bonus game described below dependent on just how many of them you spin in.

This Beach Life slot comes with a hot and sunny theme set around a coastal holiday resort, and if you choose to play it you can choose to put up to 20 unique paylines into play on each spin of its five video reels you play.

This is a fixed coin slot game and that means that you are unable to adjust the actual coin values that you will be putting into play on each payline, and as such these are static at coin values of 0.50.

So when playing all of the 20 paylines then you will be playing this Beach Life slot for stake levels of a rather large 10.00 per spin, however there are plenty of winning combinations that can be formed, along with the bonus game mentioned above.

When you throw into the mix the high payout percentage this slot has on offer then you will get plenty of winning chances including the chance of bagging that huge and every rising progressive jackpot displayed on the Beach Life slot games jackpot meter.

Be aware that as this game boasts a real life progressive jackpot then it is not a progressive slot game that you will be able to put through its paces via a free to play format, and as such you are only going to be able to play it for real money!

Plus should you be played with any form of bonus in your Playtech casino account then make sure that if you wish to play this progressive slot game that you are able to do so with that bonus, as many online casinos these days do not allow you to play any progressive slot machine with one of their bonuses!

The Beach Life Slot has a simple picking game, triggered by spinning in on one of your paylines 3, 4 or 5 Treasure Chests. For each of these chests, you’ll receive 3, 4 or 5 picks respectively.

Upon triggering, the game will go into lock down and take you to a new screen where you are presented with 12 treasure chests in a coral reef you are tasked with picking them off to reveal prizes until you have no more picks left. Upon completing the bonus game, you’ll have your winnings totted up and added to your bank roll. The game will then return you to the main screen and you can start playing again.

There are also scatter symbols in play on the Beach Life slot, and these come in the shape of Sand Castles. Being scatter they don’t need to be on a win line, just in view, and spinning in 2, 3, 4 or 5 of them will award 2x, 5x, 50x and 500x your total bet respectively. They don’t have a feature attached, but with these multipliers, that is certainly made up for!

The wild symbol is the sun, and this is also your jackpot payout, so if you haven’t read that section, or you want to refresh your memory, simply scroll back up to learn how it works, plays and pays.

If this Beach Life slot game is too rich for your slot playing budget then remember we do have reviews of plenty of lower fixed stake progressive slot machines such as the Tunzamunni slot.

You may be interested in the collection of random jackpot progressive slots we have reviewed which could award you with one of several progressive jackpots even when play for stakes as low as 0.01 per spin, so do have a good scout around or site to track these progressive slot games down!