Most Awesome Slots for Summer 2018

Scary though it is to admit, we’re now in July, with 2018 looking to whizz us by as quickly as 2017 did, and 2016 before it. Even though the years keep passing us by within the blink of an eye, and the months move along at lightning speed, in this rush of one month to the next, there’s some hidden gems of fun to be found. We’re talking about new online games. Although not loved by everyone, nobody can deny the enormity of the iGaming community, nor the sheer volume of titles it keeps creating in 2018 alone.

Out of all the activities we tend to see from this industry, online pokies are among the most commonly created, and therefore are normally the most popular. And so, as we embrace the warmer months of July (for the majority of us, at least), we can do so by checking out some of the hottest slot machines around. Some of the titles on our list have yet to be released, while others have only just been launched. Better yet, these games come from various software developers, meaning that there should be a genre/design that appeals to everyone. To kick off this mini list, we’ll start with the titles that we know are available now, followed then by the ones coming soon; that way you’ll have new games to play while you wait for the others.

Contemporary favourites, Yggdrasil, have recently launched their latest slot machine, titled Tut’s Twister. Sporting Ancient Egyptian aesthetics, this is a beautiful game, opening with a short cutscene, in which we meet Tut as he guards his tomb from explorers (such as yourselves). Once you get inside, e.g. start playing, you’ll be greeted by a 4×5 grid which houses 25 winlines inside of it, with each space on the matrix holding a symbol of value. We’d have liked to see more in-keeping iconography, but generally the graphics are most pleasing.

For an initial bet of 10p, users can spin for standard wins, the Mystery Feature, Tut’s Twister Feature, the Last Chance Spin, and so much more. As you can see, this is a multi-bonus game, and so isn’t well suited to those of you of a more purist disposition. What is more, while there’s lots of bonuses to trigger, due to the medium volatility, it’s not always easy to score these special features. Also, if you take a closer look at the paytable, you’ll notice that most of the mini games are connected to wild symbols above any others, which some of you may find too limiting.

If you’re not really a fan of Egyptian themed pokies, or maybe you just want to test drive more upcoming online games, you can do so with the soon to be launched Mystery of Long Wei. Although it isn’t ready for the general public just yet, you can play the demo version of the game via the iSoftBet website, therefore giving you a fantastic headstart. Moreover, there’s also a trailer, via YouTube, that you can watch in order to whet your appetite.

As the name suggests, this is an oriental themed slot machine, decorated with pink lotuses, roaring tigers, mystical dragons, and high winning symbols. Furthermore, all of these icons have been crammed into a 4×5 grid, of which 40 paylines are available, therefore broadening your iGaming experience. Promising Colossal Spins, where some of the grid’s symbols take up several spaces, as well as scatter symbols and wilds, Mystery of Long Wei is a reasonably sized one armed bandit. We wouldn’t say it’s the most varied, nor the easiest slot for scoring regular wins, but for 40p per bet, it’s not a badly priced slice of entertainment. We just wish we could give an exact date for its release, as not even iSoftBet’s own website details it.

From Dusk Till Dawn – Novomatic 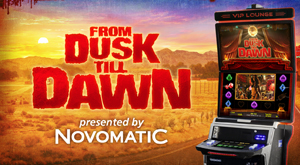 Surprisingly, we have a new slot machine from Novomatic on our list, with the old school brand releasing an official From Dusk Till Dawn game. As many of you will know, Novomatic has been around for a long time, and so it sometimes gets forgotten in favour of newer developers. Consequently, we don’t get to see many new titles from them, and so this newbie is a welcomed sight, albeit an unexpected one.

Although not out for release just yet, we do know that the game is presented inside a 4×5 matrix, a layout that seems to be favoured by many brands of late, and that it uses graphics depicting what’s seen in the film and not the TV series. Furthermore, there’ll be a Bonus Twister Wheel, three mini game specials, and a progressive jackpot of two varying sizes. However, beyond that we can’t tell you much more, as Novomatic is keeping this one close to its chest – we can’t even tell you a firm release date! Nonetheless, if vampires, badass robbers, and cult classics are your thing, then you won’t find a slot machine better suited to you.

We end on the news that Quickspin, arguably another of the contemporary gaming giants available these days, will launch their new slot machine on July 10th. Titled Eastern Emeralds, it’s set to be an oriental themed pokie that serves multiple bonuses for your bet, all while sporting a highly attractive design.

Right now, the only way to learn more about this game is to visit Quickspin’s YouTube channel and watch the trailer, where you’ll discover that this title will adhere to a 20 winlines format.

Also, there’ll be chances to activate big wins in among the special features of the 3×5 matrix. The only potential issue we can see, if you can even call it that, is Eastern Emeralds looks a lot like other games from the company, such as Volcano Riches, and so hardly any real innovation has been made. Still, for a bet of at least 20p, you’ll be able to spin your way to differing destinies, and should the volatility prove too great, at least you can grab yourself some sizeable wins along the way.
July 6, 2018Posted in News by Rob • No Comments
[B