Alice Cooper’s School’s Out is Back from Leander Games

No matter your age, you’ll likely have heard the name Alice Cooper, and if you haven’t we may have to question your taste in music. The American born singer may not be everyone’s cup of tea, but there’s no taking away from the fact that he’s seen as the main creator of ‘Shock Rock’. If you want to celebrate this man, his music, and one of his most popular songs, you’re in for a treat as Leander Games has released Alice Cooper’s School’s Out for Summer Slot.

Despite what their website may tell you, with its ‘Coming Soon’ image plastered across the slot thumbnail, this game has been out for a couple of months now. Some of you may have even seen glimpses of it on YouTube, as a sort of teaser to the real experience. The reason for all this confusion about release dates is because, while Leander is the company you see when loading the title, it’s Spike Gaming that actually created it. Once you visit Spike Gaming’s site, you gain access to the live game without issue.

Even though it’s out there for all to access, there’s no freeplays available at this time, and so few details are known except by those who are willing to flash some cash in order to experience them. Fortunately, should you want to play through without having to rely on us, the cost of doing so is cheap enough, with bets as low as 1 credit for every spin you make. 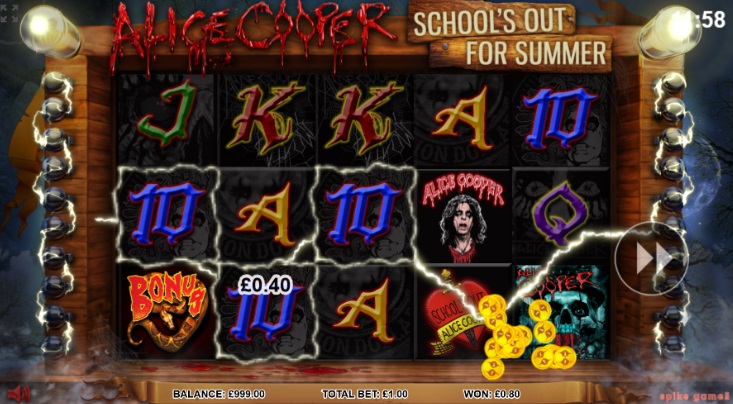 For that fee, you’ll be given a 3×5 grid packed full of weird and wonderful imagery, while the music of Cooper blares out; there’ll be the logo of Alice Cooper himself, alongside venomous snakes and School’s Out hearts pierced by daggers. If you’re one for fine details and a novelty theme done right, this is definitely a slot machine you’re going to appreciate. Nevertheless, as you’d expect with such a genre of pokie, it helps that you love the music of such artists as it’s a very specific sound.

Most of the paytable symbols are basic card values, although the tiles with the most clout (the ones that reward you handsomely), are uniquely designed for the theme of slot. The snake in particular is an icon you’ll want to activate, as between three and five of them will trigger the free spins. Seeing as this is an Alice Cooper game, the spins aren’t going to be your standard package: in this instance, you have a gamble feature mixed into the mini game, to create a more tense user experience.

There’s a couple more features worth mentioning, like the Twin Eyes random wild, but they’re much more exciting when activated during your own playthrough. If that’s something you’re interested in, be it from your computer at home or your tablet when out and about, you can do so by playing at Spike Gaming friendly casinos. There’s plenty of them out there, so you shouldn’t run into any problems when trying to wager on this 95% RTP pokie. That being said, if you do experience issues, you can always see if Alice Cooper can scare up a resolution for you.